For the first time ever, 12 Indian Americans will be a part of President-elect Biden’s cabinet/Team. Never before
1. Neera Tanden will be overseeing the budget for various federal agencies as Director of the White House Office of Management and Budget.
2. Dr. Vivek Murthy is named as the US Surgeon General
3. Vanita Gupta, Associate Attorney General. Alumnus of New York University School of Law.
4. Aisha Shah, White House Office of Digital Strategy
5. Gautam Raghavan, Deputy Director in Office of Presidential Personnel. Born in India and raised in Seattle.
6. Bharat Ramamurti, Deputy Director of National Economic Council. A resident of Boston, he is a distinguished alumnus of Harvard College and Yale School of Law.
7. Vinay Reddy, Director of Speechwriting. He was raised in Dayton, Ohio.
8. Tarun Chhabra from Tennessee will be sworn in as Senior Director for Technology and National Security. An eminent alumnus of Oxford University, Harvard University and Stanford University.
9. Sumona Guha from Maryland will be serving as Senior Director for South Asia at the National Security Council.
10. Sabrina Singh will serve as a Deputy Press Secretary
11. Vedant Patel will be an Assistant Press Secretary. Gujarat born and California based.
12. Shanthi Kalathil, Coordinator for Democracy and Human Rights. An Indian-origin Californian, Shanthi graduated from UC Berkeley and the London School of Economics… 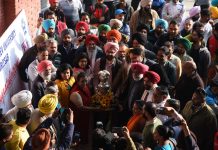