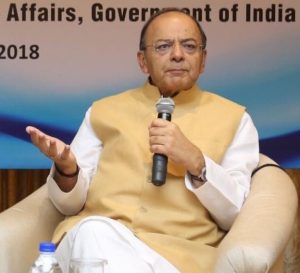 Union Minister Arun Jaitley on Friday warned Indians having illegal deposits in Swiss banks, that they would be subjected to the harsh penal provisions of the black money law in India, after flow of information from Switzerland regarding bank deposits by Indians will start from  January, 2019.

Arun Jaitley in a blog said,” A news item has appeared today indicating an increase of money by ‘Indians’ in the Swiss banking system. This has led to misinformed reaction in certain circles raising a query whether the Government’s anti-black money steps have yielded results.”

“Any illegal depositor knows that it is a matter of months before his name becomes public and he will be subjected to the harsh penal provisions of the black money law in India,” he added.

“Switzerland is on the verge of making disclosures in real time and, therefore, is no longer an ideal destination for tax evaders. Those who participate in a public discourse must understand these basic facts before expressing an opinion which may be ill-informed. To assume that all the deposits are per se tax evaded money or that Switzerland in the matter of illegal deposits is what it was decades ago, is to start on a shaky presumption,” jaitley further added.