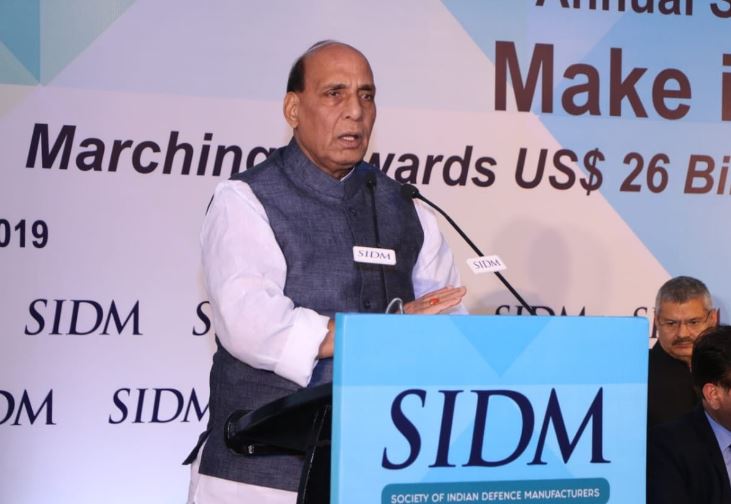 Defence Minister Rajnath Singh on Tuesday said the Government is committed to work towards achieving a USD 26 billion Defence industry by 2025. Addressing the second annual session of Society of Indian Defence Manufacturers in New Delhi, he said the Defence sector has been identified as one of the most prominent sectors under “Make in India” Initiative to realize USD 5 Trillion Economy by 2024.

Underlining the need to reduce dependency on arms imports, Singh said several steps have been taken under the “Make in India” initiative to make the country a major Defence manufacturing hub and net Defence exporter. The Government would not hesitate to initiate more measures, if required, he added.

He said that the defence production policy reflects the resolve of the government to achieve USD 26 billion Defence industry with an anticipated investment of USD 10 Billion in aerospace and Defence goods and services by 2025. This will also provide employment to about 2-3 million people. He said, the government has introduced many far-reaching reforms in the past five and a half years to create an ecosystem where private and public sectors contribute together as per their respective strength and experience. The reforms have touched almost all aspects of Defence production and procurement, he added.

Rajnath Singh said, the government has simplified industry licensing process, increased the FDI cap and taken necessary steps to promote Defence exports. He said, Defence offset policy has been streamlined and government owned trial and testing facility has been provided to private sector. Two Defence industrial corridors have been launched in Tamil Nadu and Uttar Pradesh.

Elaborating the Government’s initiatives to promote Start-Ups and MSMEs, the Minister said that at present over 8000 MSMEs are engaged in Defence production. Efforts are on to double this figure to 16,000.

Referring to the strong IT industry of the country, Singh said that a road map has been prepared to promote Artificial Intelligence in national security to make India a significant power in Defence AI. It has been planned to develop 25 Defence Specific AI products by 2024.

Singh said that steps are being taken to make defence manufacturing sector self-reliant and a new Transfer of Technology (ToT) policy is under process that will pave the path of transferring DRDO developed technologies to the industry. A new policy on the use of DRDO patents by the industry is under consideration to promote and motivate Defence industry for innovation. He mentioned that till now over 900 ToT licencing agreements have been signed with the industry which is a major step towards making Defence manufacture sector self-reliant.

Rajnath Singh assured the Defence Manufactures of all possible support from the Government. He said that the government is open to new ideas and is committed to fully harness the energies, entrepreneurship spirit and enterprise of private sector in the defence sector.