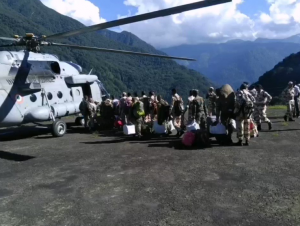 The Indian Army rescued nearly 350 people, including 115 civilians, 216 Army personnel and 12 personnel of Indo-Tibetan Border Police (ITBP) in Sikkim over the past two days after torrential rains and massive landslides hit the north and east region.

Wing Commander Ratnakar Singh in a press statement said, “Lines of communication have come to a standstill and daily activity has come to a halt in most parts of the state. The road connectivity has been disrupted due to landslides in the region of north and east Sikkim.”

Government officials say that the relief and restoration work in Sikkim is being carried out on a war footing since the rain stopped late September 16. The state power department has restored electricity connections and water supply has also been restored.

Statement reads “On Sunday they brought down 168 people, including several ladies and children to safety. Today (Monday) they have pulled out 184 people from Chugthang Mangan Chhaten to the safety of Gangtok and Bagdogra. They also lifted 15.5 tons of fresh rations and delivered nine tons of relief material to the stranded population. On Monday they rescued ITBP personnel apart from Civil tourist population and Army personnel.”

Along the North Sikkim highway, the forest department officials and the quick response team have cleared all the blocked roads in Mangan town and other areas.