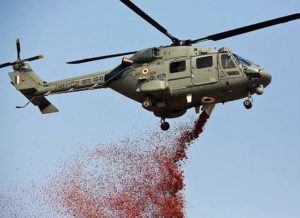 Indian Armed forces on Sunday honoured Corona warriors fighting the disease in various ways. As a gratitude to all the Corona Warriors in India, IAF along with sister services dropped petals over Police War Memorial in delhi as well as at various hospitals all over the country.  Fighter aircraft comprising of the Sukhoi-30 MKI, MiG-29 and Jaguar also did flypast at various locations across the country.

Defence Minister Rajnath Singh thanked the initiative of the armed forces and said, “I thank the Armed Forces for their special initiatives like fly pasts, showering flower petals and several other performances to express gratitude towards medical professionals, police and other frontline warriors. The entire nation stands united in these challenging times.”

“The Armed Forces today have organised several activities to show their respect and express gratitude towards the Corona Warriors who are battling against the global pandemic. These frontline warriors are doing commendable work in strengthening India’s fight against COVID-19,” Rajnath added.

Union Home Minister Amit Shah saluted the Corona Warriors for their unmatched contribution and sacrifice in fighting the COVID-19 epidemic. Shah in a tweet said, “India salutes its heroic Corona warriors. I assure you that the Modi government and the entire country stands beside you. We have to free the Nation from Corona by turning the challenges into opportunities and set an example for the world by creating a healthy, prosperous and strong India. Jai Hind!”

“Today, the Corona warriors were honoured in various ways by the Indian armed forces. The scenes of respect shown by the Indian armed forces towards the doctors, police, paramilitary forces and other warriors, who work day and night to liberate the country from Corona, are heart touching. The bravery shown by these warriors while fighting Corona is certainly venerable,” Shah added.

Shah further said, ““The bravery with which India is fighting the Coronavirus is truly admirable. Today the three armed forces paid floral tributes to the brave soldiers fighting the disease, at the National Police Memorial. The whole country stands with their brave soldiers and their families in this difficult time.”