India and United States (US) defence delegations on Tuesday held a virtual meeting to discuss defence cooperation including co-development of defence equipment.

US State Bureau of South and Central Asian Affairs in a tweet said, “Senior defense officials from the US & India met virtually today to discuss defense industrial cooperation, including co-production & co-development of defense equipment. The #USIndia defense partnership is a cornerstone of the US-India Comprehensive Global Strategic Partnership.”

According to the official release by the Indian Ministry of Defence, it says, “The aim of the meeting is to bring sustained leadership focus to the bilateral defence trade relationship and create opportunities for co-production and co-development of defence equipment. Four Joint Working Groups focused on land, naval, air, and aircraft carrier technologies have been established to promote mutually agreed projects within their domains.” 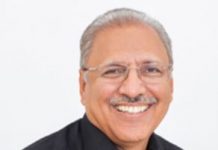