Prime Minister Narendra Modi in his address to the nation on India’s 73rd Independence Day said a Chief of Defence Staff will be the head of the three services.

“Our forces are India’s pride. To further sharpen coordination between the forces, I want to announce a major decision from the Red Fort: India will have a Chief of Defence Staff- CDS. This is going to make the forces even more effective,” PM Modi announced from the Red Fort.

PM Modi also talked on the abrogation of Article 370, he said, “We do not believe in creating problems or prolonging them. In less than 70 days of the new Government, Article 370 has become history, and in both Houses of Parliament, 2/3rd of the members supported this step. We want to serve Jammu, Kashmir, Ladakh.”

“The old arrangement in Jammu, Kashmir and Ladakh encouraged corruption, nepotism but there was injustice when it came to rights of women, children, Dalits, tribal communities. The dreams of sanitation workers were incomplete. How can we accept such a situation,” PM added.

PM Modi further said, “Those who supported Article 370, India is asking them: If this was so important and life changing, why was this Article not made permanent. After all, those people had large mandates and could have removed the temporary status of Article 370.”

“We think differently and it is India First for us. Politics comes and goes but steps in the interest of the nation are paramount,” PM said 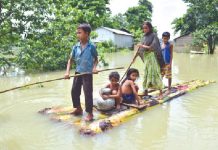