The Indian and Pakistani armies on Monday traded heavy fire on the Line of Control (LoC) in Jammu and Kashmir’s Rajouri district, prompting authorities to close schools in the area.

According to a police officer, the firing and shelling from across the border started in Keri, Lam, Pukharni and Peer Badaser areas of Nowshera sector.

The defence sources said, “the Pakistan Army were using automatics and mortars to target Indian military and civilian facilities. 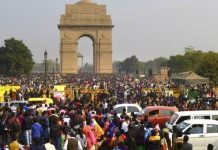