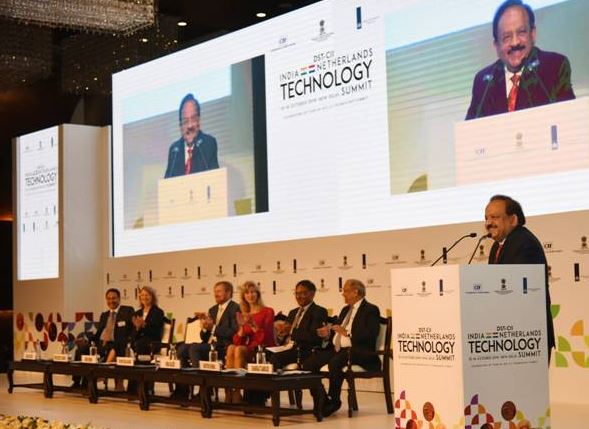 In his address during the inaugural session of India- Netherlands Technology Summit in New Delhi Dr Harsh Vardhan highlighted the shared heritage and common beliefs between both countries that has led to further intensify cooperation and build a sound bilateral relationship. He said, “Countries such as ours need to combine forces to seek sustainable answers to pressing global issues. These include poverty, hunger, job creation, energy security, human rights, gender inequality. At the same time we need to work together on climate change, terrorism, and depletion of natural resources”

Recalling the centuries old partnership between India and Netherlands, the Minister stated that traditional items of trade between them had given way to more high technology ones. He added that India and the Netherlands were celebrating 10 years of cooperation in Science, Technology and Innovation space, especially in areas such as Urban Water Management, Smart Energy Grids, and anti-microbial resistance, among others. He stated that Netherlands could help India in its quest to double farmers’ income by improving water technology in the farm sector.

Additionally, the Minister informed that India has nurtured over 40,000 startups over the last 5 years, of which about 31 have achieved the Unicorn status. Dr Harsh Vardhan stated “We have initiated programs like Start-Up India and today we are number 3 in the world in terms of number of start-ups. We wish to nurture this culture further. We are encouraging new solutions based on technologies such as Machine Learning and Artificial Intelligence”.

Speaking at the inaugural session, Dutch King Willem-Alexander said that India and Netherlands complement each other in terms of technology. He stated that in the Netherlands experience, India was a partner you could trust, and both could work together in areas such as Agriculture and Food Security, Water management and Climate Change. Another area where he felt that the two countries could share their experiences and approach was in terms of Public Private Partnerships.