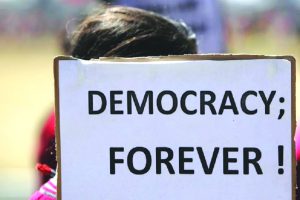 India dropped 10 places in the Democracy Index’s global ranking to 51st place, with the survey describing the erosion of civil liberties in the country as the primary cause of the democratic regression. However, in comparison, Bangladesh is at 80th place and Pakistan is at 108 and China is at 153.

The Democracy Index — prepared by Economist Intelligence Unit, the research and analysis division of The Economist Group — provides a snapshot of the state of democracy worldwide in 165 independent states and two territories. It is based on electoral process and pluralism, functioning of government, political participation, political culture and civil liberties.

India’s score of 6.9 on a scale of 10 is the lowest since the index was first published in 2006. The country’s corresponding scores were 7.81 in 2016 and 7.23 in 2017 and 2018. Publishers of the index said the primary cause for democratic regression in India was the “erosion of civil liberties”.

The fall has been attributed to three major recent decisions — the passage of a “discriminatory” Citizenship (Amendment) Act 2019 by Parliament; the persistence around a controversial National Register of Citizens; and the situation in Jammu and Kashmir after the abrogation of Article 370 of the Constitution. Specific references to these three have been made to explain India’s decline, which the Opposition termed as “unsurprising”.

“The passage by Parliament in December of a discriminatory CAA suggests India’s decline will continue in the 2020 Index,” publishers today said.The index considers five segments to rate nations on democratic power — electoral process and pluralism; the functioning of government; political participation; political culture and civil liberties.

With the survey listing India among countries where there were “regressions”, in Asia and Australia region, India ranked eighth, behind countries such as Timor-Leste, Malaysia and Taiwan. By contrast, Norway topped the index, with a score of 9.87, while North Korea was at the bottom of the global rankings, with a score of 1.08.

China’s score fell to 2.26, and it is now ranked 153rd, close to the bottom of the rankings. The biggest change occurred in Thailand, whose score improved by 1.69 points compared with 2018, to 6.32, resulting in a rise of 38 places, while introduction of a “fake news” law in Singapore led to a deterioration in the score for civil liberties.

The Democracy Index referred to the changes in Jammu and Kashmir and the controversial implementation of the National Register of Citizens (NRC) in Assam while describing what it said was the “democratic regression” in India, the world’s largest democracy. It said, “The Indian government stripped the Jammu and Kashmir (J&K) state of its special status by repealing two key constitutional provisions granting it powers of autonomy”.

“Ahead of the move, the government deployed a large number of troops in J&K, imposed various other security measures and placed local leaders under house arrest, including those with pro-India credentials. The government also restricted internet access in the state,” it added. The Democracy Index noted that the “citizenship registration exercise” in Assam had “excluded 1.9m from the final list of the National Register of Citizens (NRC)”. “The vast majority of people excluded from the NRC are Muslims” it said.

CPM general secretary Sitaram Yechury reacted “there was nothing surprising about India’s democratic regression”. Dr. Abhishek Manu Singhvi, MP, Spokesperson AICC observed, “We are diminishing democracy in possibly the world’s proudest democracy, certainly the world’s largest democracy, certainly something of which each Indian is terribly-terribly proud. We can’t think of a single country which has remained a vibrant, diversified democracy as India is and certainly no one of the size and the complexity of India. But, it is the first time since 2006 when the index started, it has never been as low as 51 for India.”