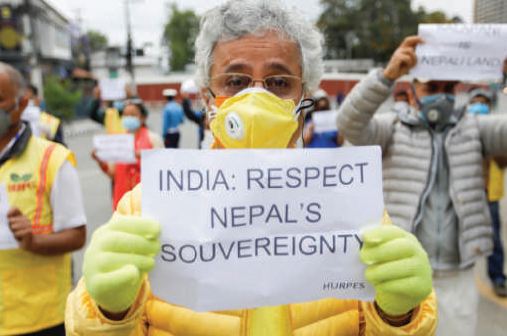 While China has behaved in a very shocking manner, bordering on utter irresponsibility, along the Line of Actual Control in the Eastern Ladakh region at a time when the global community is busy handling the Covid-19 pandemic as a united entity, Nepal has found an opportunity to set itself on a collision course with India through the adoption of a controversial map of the Himalayan nation by its parliament (Rashtriya Sabha).
Nepal’s new map shows three areas in Uttarakhand — Kalapani, Lipulekh and Limpiadhura — belonging to the Himalayan nation, but India has forcefully rejected the claim as being unjustifiable. However, dismissing the claim is not enough. Nepal is our next-door neighbour with a history of friendly relations with India. The situation changed when Nepal freed itself from monarchical rule, resulting in the communists there capturing power. They have natural affinity with the communists in China, but the people of Nepal feel more comfortable in India. This people-to-people factor should be exploited to keep Kathmandu away from the influence of Beijing.
The map issue can be settled to the satisfaction of both sides if there are open discussions in this regard. The 35-km area of Kalapani, lying at the tri-junction of India, China and Nepal, became a part of Indian territory following an understanding reached with the late King Mahendra in 1962. This historical reality can help get the situation reversed through dialogue in a relaxed manner with the help of old records, documents and survey reports.
Nepal got upset when India released its revised map on November 2, 2019, following the August 5, 2019, bifurcation of Jammu and Kashmir as union territories. The Nepalese uneasiness reached a new high when Defence Minister Rajnath Singh inaugurated a road connecting India with China though Lipulekh in the Kalapani area on May 8. The communist rulers of Nepal are allergic to anything that has a connection to their country’s monarchy, now a thing of the past. They should be made to realise in a friendly manner that their likes or dislikes cannot change what happened in the past through legal means.
Let us now take the border crisis caused as a result of the clashes in the Eastern Ladakh region along the Line of Actual Control. Experts believe any kind of differences could be sorted out through dialogue at various levels which could have saved the precious lives of 20 Indian Army personnel and those who would have died on the other side.
What has China gained at the end of it all? Nothing. In fact, they would be major losers in terms of trade and industry in the days to come. Perhaps, the Chinese thought that they would do anything and get away with it. They have been proved that their calculations were not based on the existing ground reality. India today is not what it was in 1962 when it suffered much reverses during the war with China.
China may have certain advantages over India in terms of military matters and the size of the economy, but Beijing can never think of taking on India by showing off its military muscle. India too has enormous military strength to give a befitting reply to China. The Prime Minister apprised opposition leaders during the June 19 all-party meeting, “For the last few years we have prioritised developing infrastructure, easing supply lines and equipment. Because of the new infrastructure, especially at the LAC, our capacity for patrolling has increased and because of that we are able to monitor and respond to things. Till now, the movement of those which used to take place without disruption is now checked by our jawans.”

This is alright, but something somewhere appears to have gone wrong leading to the loss of 20 precious lives. There was need for extra caution to deal with the unpredictable Chinese. As Congress leader Sonia Gandhi pointed out during the all-party meeting, “crucial time” was lost in getting engaged with China by initiating diplomatic-level dialogue after first reports of Chinese intrusion on May 5 were received.

By releasing a statement on June 19 China has revealed its designs by claiming the entire Galwan Valley, including the areas currently on the Indian side of the LAC. The Galwan Valley is the area where exactly the June 15 clashes between Indian and Chinese soldiers occurred, resulting in the death of 20 Army personnel.
China has claimed through the statement that “the Galwan Valley is located on the Chinese side of the LAC in the western section of the Sino-Indian border,” but India has described it as “exaggerated” and “untenable”, not in accordance with the understanding reached during a dialogue involving two high-level military officers on June 6. Elaborating its stand, India has made it clear that “all its activities are always within the Indian side of the LAC” and China should “also confine its activities to its side of the LAC”.
Responding to the Chinese claim, External Affairs Ministry spokesperson Anurag Srivastava stated that it was the Chinese side that had violated the LAC and “sought to erect structures”. The Beijing’s claim to the Galwan area is “not in accordance with China’s own position in the past”.
How the face-off comes to an end remains to be seen. Former Army Chief Gen VP Malik has been quoted to have said that under the prevailing environment of high tension, chances of another clash are very high, especially at Pongong Tso (lake). Any brawl at this stage is unlikely to remain limited to fisticuffs, pushing, jostling or fighting with sticks and stones. Another Army Chief Gen Bikram Singh has come out with the view that “an amicable resolution is possible only through diplomatic and political channels.”
In the meantime, Prime Minister Narendra Modi’s  closing remarks at the all-party meeting on the India-China LAC faceoff generated much heat when he reportedly said, “Neither has anyone intruded into our frontier nor is anyone present there, nor are any of our posts under someone else’s occupation”. When the opposition, particularly the Congress, raised uncomfortable questions in this regard, the government had to come out with a clarification that the Prime Minister’s remarks pertained to the situation in the Galwan Valley after the border clashes on the June 15 night.
Interestingly, India has been getting open support in this regard from the Donald Trump administration in the US. “The PLA (People’s Liberation Army) has escalated border tensions with India, the world’s most populous democracy. It’s militarising the South China Sea and illegally claiming more territory there, threatening vital sea lanes,” US Secretary of State Mike Pompeo said in a major speech on China. He went to the extent of describing the ruling Chinese Communist Party as a “rogue actor”.
Any kind of support from world capitals during these hours of crisis are bound to be taken as quite comforting. But India has to keep its own national interests uppermost while dealing with its neighbours, not allowing itself to be sucked into any global game of power.