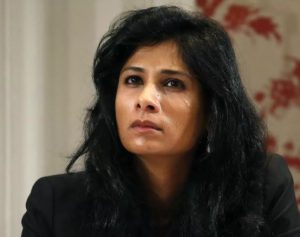 She is the John Zwaanstra Professor of International Studies and Economics at Harvard University and her research focuses on international finance and macroeconomics.

IMF MD Christine Lagarde while congratulating Gopinath on her appointment said, “Gita Gopinath is an outstanding economist, with impeccable academic credentials, a proven track record of intellectual leadership, and extensive international experience. I am really delighted to name such a talented figure as the IMF’s Chief Economist.”

Gopinath was born and grew up in India, is a US citizen and an Overseas Citizen of India. She did her PhD in Economics from Princeton University in 2001 after earning a BA degree from University of Delhi and MA degrees from both the Delhi School of Economics and University of Washington.

Her profile on the Harvard University website says that she has also served as a member of the “eminent persons advisory group” on G20 matters for India’s Finance Ministry.