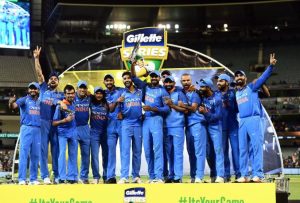 India beat Australia in the third and final ODI in Melbourne to take the series 2-1.

MS Dhoni’s 87 – his third consecutive half-century, and 61 from Kedar Jadhav lead the way as Australia’s 230 is chased down for a seven-wicket victory.

“What a run-chase. The Dhoni-Jadhav duo take #TeamIndia to a thumping 7-wicket victory,” BCCI tweeted.

A career best from Chahal and another perfectly timed chase led by Dhoni handed India the ODI series with a seven wicket win at the Melbourne.

President of the Republic of Zambia to visit India on August...