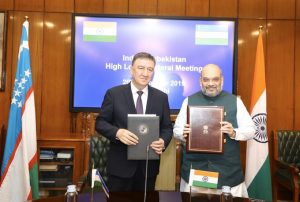 A delegation from Uzbekistan, led by Minister of Internal Affairs, Pulat Bobojonov, met the Indian delegation, led by Union Minister for Home Affairs, Amit Shah, in New Delhi today. Bobojonov is on a bilateral visit to India from November 20-23, 2019.

During the meeting, the two sides discussed issues of mutual interest including bilateral counter-terrorism cooperation, capacity building and training for Uzbek security personnel in Indian institutions, border guarding and disaster management. Emphasizing on India-Uzbekistan Strategic Partnership, the Ministers welcomed increased cooperation between India and Uzbekistan in the area of security cooperation.

Both sides affirmed that the visit of Prime Minister of India to Uzbekistan in 2015 and 2016 and visit by President of Uzbekistan to India in October 2018 and January 2019 have provided a new impetus to our relationship.

The Indian delegation included Minister of State for Home Affairs, Nityanand Rai, along with other senior officers from the Ministry. 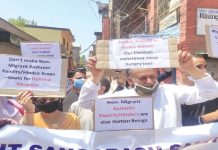