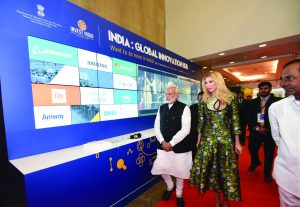 Nowhere in the world has the Startup ecosystem blossomed so expeditiously as in India which reflects the talent pool of innovation and entrepreneurial treasure that India has and is set to showcase the global fraternity. Recently held 8th annual Global Entrepreneurship Summit (GES) has turned the spotlight once again on India’s booming start-up economy. The Summit was held in Hyderabad, India on 28-30 November 2017. Ivanka Trump, Advisor to the US President led the United States delegation to the Summit. India is now the rockstar of the start-up world. Over the past three years, it has become the third largest start-up ecosystem, big enough to pull not only the likes of Ivanka Trump, but also serious money.

According to data compiled by Inc42, over US$9.4 billion in funding has flowed into Indian start-ups during January-September 2017. There are more than a hundred funds registered with market regulator Securities and Exchange Board of India alone. This is over and above the money which the Government of India is prepared to put in. The Government has announced a corpus of? 10,000 crore (about US$ 1.5 billion) to fund start-ups. In fact, 75 Startups have already received funding. India’s policy on foreign direct investment has been amended to allow 100% of funding of start-ups requirements from foreign venture capital investors.

India is one of the fastest growing Startup hubs in the world. According to Nasscom Startup Report 2017, India has seen an addition of over 1,000 startups during January-September 2017, strengthening its position as the 2nd largest startup ecosystem across the world, amidst intensifying competition from countries like UK and Israel. This takes the total number of technology startups to over 20,000 including over 5,200 tech startups, with their combined valuation reaching US$50 billion. In India, as many as 1,300 startups are created every year. To support the early stage startups, there are 200+ incubators and accelerators and US$9.5 billion funding has been imparted since January 2016. There has been a 40% incubator growth annually. Twenty-eight is the average age of the founders and Bengaluru is the favourite hub for startups in India. The report further said that the country is witnessing a rapid rise in the business to business startups focused on verticals like healthtech, fintech, e-commerce and aggregators. India is also world’s youngest start-up nation with 72 per cent founders of startups in India being less than 35 years in age.

The Indian Government is fully supporting to build a robust ecosystem for nurturing innovation-led startups.  More and more startups in India are now focusing on developing products and solutions based on innovative technology. A number of startup incubation centres set up in academic institutions like Indian Institutes of Technology (IITs) and startup accelerators based in tier-I and tier-2 cities can be a source for developing disruptive technologies and acquiring entrepreneurial talent. India offers a great opportunity for companies and their R&D centres to partner, invest, or acquire talent and disruptive technologies that are being developed by these startups.

To foster Startups, nurture innovation and promote an enabling startup ecosystem which can foster entrepreneurship, Government of India launched a flagship initiative Startup India on 16 January 2016. Through this initiative, the Government plans to empower Startup ventures to boost entrepreneurship, economic growth and employment across India. The Government’s Action Plan focuses both on restricting hindrances and promoting faster growth by way of a) Simplification and Handholding; b) Funding Support and Incentives and c) Industry-Academia Partnership and Incubation.

Government has also launched a ‘Startup Hub India’ to act as online platform for Entrepreneurs to connect with other Entrepreneurs, Advisers, Consultants, Mentors, Guides, Angel Investors, Incubators, Accelerators & Venture Capital Firms. This platform helps entrepreneurs connect, collaborate, learn, seek advice and network with fellow members. The Government has already launched iMADE, an app development platform aimed at producing 1,000,000 apps and PMMY, the MUDRA Bank, a new institution set up for development and refinancing activities relating to micro units with a refinance Fund of? 200 billion (US$3.1 billion). There are about 44 schemes run by various arms of the Government, all of which provide tax breaks, incentives, grant money and other forms of assistance to wannabe ‘technopreneurs’.

Startups and entrepreneurs in India are maturing and looking deeper into specific problems and finding specific solutions for the people. For them, the next big opportunities are in pockets untouched so far by technology. These involve the use of machine learning and artificial intelligence to solve inefficiencies in logistics, healthcare, education and financial services. Global attention is turning to India’s rich talent pool, advancements in disruptive technology, robust innovation network and alliances, and ability to drive customer-centric models. It reflects India’s strengths as an innovation enabler and its emerging role as a promising destination for technology innovation.

India is willing to share with Oman its rich experience in incubation and promotion of entrepreneurship. India and Oman can build a partnership where the StartUp Ecosystem in India can look at opportunities in Oman and participate in development of Oman as a hub of Tech-Entrepreneurship, with an ecosystem which promote SMEs to look at Technology Solutions. Also, co-operation between India and Oman in the field of higher and technical education, skill and vocational training and development of SMEs will benefit both the countries in generating employment and strengthening economy.