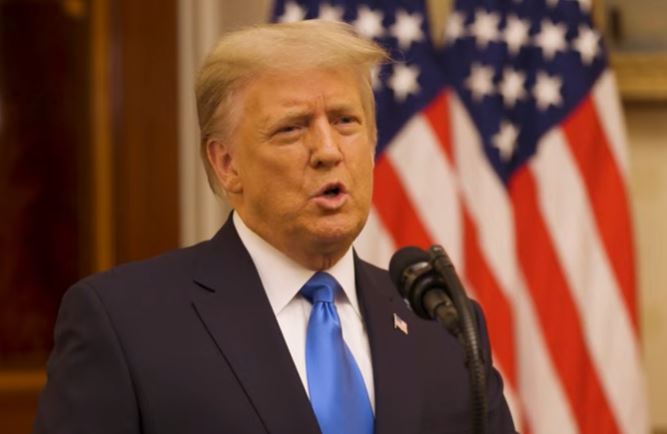 US President Donald Trump, in his farewell address released on Tuesday, highlighted his accomplishment as president and wished luck to the new administration.

“As I conclude my term as the 45th President of the United States, I stand before you truly proud of what we have achieved together,” Trump said in a little less than 20-minute video.

“This week, we inaugurate a new administration and pray for its success in keeping America safe and prosperous. We extend our best wishes, and we also want them to have luck — a very important word,” Trump said.

The address was released a day ahead of President-elect Joe Biden’s inauguration, scheduled to take place on Wednesday afternoon.

The outgoing president thanked first lady Melania Trump and his family, along with Vice President Mike Pence, his chief of staff Mark Meadows, his Cabinet, administration staffers and the United States Secret Service.

Trump condemned the riot at the US Capitol on January 6-for which he’s facing a Senate impeachment trial for allegedly inciting-and sought unity from his fellow Americans.

“All Americans were horrified by the assault on our Capitol. Political violence is an attack on everything we cherish as Americans, it can never be tolerated. Now more than ever we must unify around our shared values,” Trump said.

Listing out some of the key accomplishments of the US government in the last four years, Trump said his administration achieved more than anyone thought possible.

“Nobody thought we could even come close,” he said referring to the largest package of tax cuts, slapping tariffs on China, achieving energy independence and development of a COVID-19 vaccine in a record short span of time.

“Now, as I prepare to hand power over to a new administration, at noon on Wednesday, I want you to know that the movement we started is only just beginning. There’s never been anything like it,” Trump said.

“I go from this majestic place with a loyal and joyful heart, an optimistic spirit, and a supreme confidence that for our country, and for our children, the best is yet to come,” he said.