Omar Abdullah Former Jammu and Kashmir chief minister Omar Abdullah on March 18 called upon India and Pakistan to uphold the ceasefire on the Line of Control (LoC), saying innocent lives were being lost to border skirmishes.

“Ceasefire was the best gift India and Pakistan gave to the areas near the border and the LoC, but since the last few years, we are continuously seeing that it has remained confined to paper only. It is not being implemented. I request both New Delhi as well as Islamabad to please follow the ceasefire as part of the CBMs (confidence building measures),” Abdullah said.

Innocent lives are being lost, he said and referred to the killing of five members of a family in Pakistani shelling on March 18.

The former J&K chief minister added that two girls were in hospital.

“This is too much. We want there should be peace on the border and the LoC,” Abdullah said. 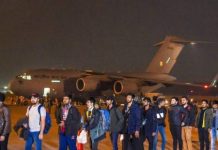