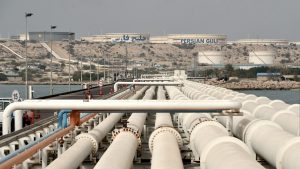 US secretary of state Mike Pompeo announced that the Donald Trump administration would no longer grant exemptions to some countries to import Iran oil with the conditional waiver.  The deteriorating relations of Iran and Saudi Arabia prompted the US action. It has recalled all non-emergency diplomatic staff based in neighbouring Iraq; sent an aircraft carrier, the USS Abraham Lincoln, missile defence hardware and B-52 bombers to the Gulf; imposed fresh sanctions on various Iranian entities; and slapped a terror designation for the Islamic Revolutionary Guard Corps.

There is heightened tension over the recent attack on two Saudi Arabian oil tankers off the coast of the United Arab Emirates (UAE) and the kingdom’s land installations by unidentified groups, leading to a sudden spike in crude oil prices of about 3 per cent.  The build-up has picked up further momentum as the United States assembled military assets in the region, aiming to pin down Iran. An end has accompanied this to the waiver granted to eight countries, including India and China.

Iran has matched some of the rhetoric with threats that it would close off the Strait of Hormuz to trade and treat the U.S. carrier as a legitimate “target” if it came anywhere close to Iranian waters. Making matters worse, it is clear that the U.S. aims to pin on the Iranian government and military forces blame for attacks on two Saudi Arabian oil tankers over the weekend. U.S. National Security Adviser John Bolton’s remark that “any attack on United States interests or those of its allies will be met with unrelenting force” gives the impression that the ground is being prepared by the U.S., aided by Saudi Arabia and Israel, for an escalation.

Given the signs of a gathering storm, India must consider not only its own interests in terms of its ties with Iran and with the U.S. and its allies but also its position as a regional power. External Affairs Ministry comment that the government would take a decision on Iranian oil imports after the elections appeared to be an attempt to buy time. Now when Narendra Modi government has stormed back to power, the decision will be coming any day.

The truth is that Indian oil importers have already stopped placing orders for Iranian oil in compliance with the U.S. diktat on “zeroing out” imports. India had been importing about 10% of its oil requirements from Iran.  One immediate priority is to work more closely with European countries in ensuring that Iran does not feel compelled to walk out of the nuclear deal and to jointly build a sanctions-immune financial infrastructure to facilitate Iranian trade. It is necessary that the countries affected in the region meet urgently, as well as unitedly express concerns over a possible U.S.-Iran clash.

India is trying to leverage its robust ties with West Asian crude oil producers such as Saudi Arabia, Kuwait, and the United Arab Emirates (UAE) to source additional volumes at terms similar to those of its annual contracts in a bid to avert any sharp rise in its domestic oil prices.

India, the world’s third-largest oil importer, is in discussions with oil producers in West Asia as well as in other geographies to procure a total of about 15 million tonnes of extra crude over the year to urgently bridge a supply gap that will be caused by the exit of Iran from its energy basket.  India’s attempt to boost crude supplies from the Gulf nations also comes at a time when they plan to increase their investments in India.  Crude purchased under the annual contract terms would be more lucrative for India than under spot contracts. Such contracts would also allow for purchasing additional quantities of crude at similar terms.

India is a major importer of Iran oil and imported 23.5 million tonnes in 2018-19 from the country.  India is one of the top consumers of the Organization of the Petroleum Exporting Countries (Opec) accounts for about 40% of the global output. Saudi Arabia is a prominent member of the grouping.  The US had granted exemptions to China, India, Italy, Greece, Japan, South Korea, Taiwan, and Turkey to ensure a well-supplied oil market.

Saudi Arabia is the second-largest supplier of crude and cooking gas to India. India imported 36.8 million tonnes of crude oil from Saudi Arabia, accounting for 16.7% of total imports in 2017-18. The UAE accounts for 6% of India’s crude imports, with Adnoc, the world’s 12th-largest producer, being the only foreign energy company to partner India’s strategic petroleum reserves programme. People familiar with the developments said the US is working with Saudi Arabia and UAE to ensure that there is no crude shortage.  India has also been sourcing crude from the US. It sourced 2.75% of its total oil requirements from the US during the April-January period.

Supply worries are a major part of the problem. This is particularly true for India, as the Iranian crude came at a discount on the price as well as lower cost of shipping, insurance and with a longer credit period. There may still be a small window available for getting crude as part of a rupee trade with Iran, but there is no guarantee that such supplies could escape the prying eyes of US surveillance.

Nearly a third of all crude flow happens through Iran’s strategic Strait of Hormuz, which Tehran has been using as a bargaining point in its tiff with the US. As US President Donald Trump announced walking out of the nuclear deal with Iran unilaterally, there have been apprehensions of Tehran trying to disrupt traffic through the channel.  For the time being New Delhi has nothing much to worry about its inability to access Iranian crude as it has diversified the supply sources. India has a strategic partnership with the UAE, which supplies about 6 per cent of its crude imports.  Should things come to a crunch, Abu Dhabi has secured its oil exports by building a strategic pipeline to the northern emirate of Fujairah, opening up a new supply route to the Indian Ocean bypassing Hormuz.