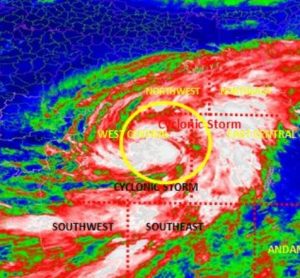 The India Meteorological Department (IMD) issued a red alert for Odisha as a deep depression over the Bay of Bengal had intensified into a severe cyclonic storm, Titli, and was moving towards the Odisha-Andhra Pradesh coast.

H R Biswas. Director Meteorological Centre Bhubaneswar reportedly said, “Titli is very likely to intensify further into a severe cyclonic storm during the next 24 hours. It is likely to move northwestwards from tonight and cross Odisha and adjoining north Andhra Pradesh coasts between Gopalpur and Kalingapatnam around Thursday.”

State Chief Minister Naveen Patnaik has issued an alert to all coastal districts and asked the authorities to evacuate those people living in low-lying areas and in ‘kutchha’ houses along the coast.

Fishermen have been advised not to venture into west-central and north Bay of Bengal till October 11.

The state government orders closure of schools, colleges and anganwadi centres in Gajapati, Ganjam, Puri and Jagtsinghpur from today.

The meteorological department said Cyclone Titli is presently positioned 280 km south-southeast of Gopalpur in Odisha and 230 km southeast of Kalingapatnam in Andhra Pradesh.

Nearly 300 motor boats have been arranged to assist in the rescue operations.

NDRF and Orissa Disaster Rapid Action Force along with Fire Service personnel have been sent to various districts.

All the 879 cyclone and flood shelters have been kept in a state of preparedness.