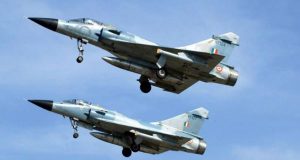 The Indian Air Force (IAF) on early Tuesday dropped around 1,000 kg bombs on Jaish-e-Mohammed terror camps across the Line of Control (LoC).

As per sources, Balakot, Chakothi and Muzaffarabad terror launch pads across the LoC have been completely destroyed in the Indian Air Force strikes.

According to the reports, the strike was carried out at around 3:30 this morning by 12 Mirage 2000 fighter jets.

India’s operation came two weeks after the terror attack in Pulwama in which at least 40 soldiers of the Central Reserve Police Force (CRPF) were killed when a suicide bomber of the Pakistan-based Jaish-e-Mohammed (JeM) exploded a car full of bombs next to a security convoy.

According to the reports Prime Minister Narendra Modi has been briefed on the air strikes conducted by National Security Advisor Ajit Doval.

Jammu and Kashmir chief minister Omar Abdullah took to his twitter account and tweeted, “Wow, if this is true this was not a small strike by any stretch of imagination but will wait for official word, should any be forthcoming.”

Omar erased question in a tweet whether the strikes by IAF planes took place in Balakote in KPK or Poonch sector.

“If this is Balakote in KPK it’s a major incursion & a significant strike by IAF planes. However, if its Balakote in Poonch sector, along the LoC it’s a largely symbolic strike because at this time of the year forward launch pads & militant camps are empty & non-functional,” Omar tweeted.

“Unless we know which Balakote is being talked about by the Pakistani generals it’s pointless speculating about what we may have hit & what fallout the airstrike will have,” Omar added.

The JeM had claimed responsibility for the February 14 attack and had also posted videos of the bomber, who had joined the terror group a year ago.

After the Pulwama terror attack, India had appealed to the international community to back the naming of Jaish-e-Mohammed chief Masood Azhar as a “UN-designated terrorist”. 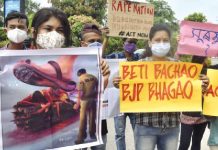