It would be tempting to call I, Me Aur Main ahead of its times, if it wasn’t for the fact that it appears so only because Bollywood has shown itself to be patently behind the times. Apart from the resolution at the end of the film, which is a refreshing change from the usual climactic scene of the Bollywood romcom, there are a number of moments in it that, at least ostensibly, demonstrate a modernity that the industry has shied away from: the doting mother leaving her demanding husband as she feels she deserves a retirement too, or the independent girl next door with a passion for electronics. But while the subversion of traditional gender roles is all well and good, I, Me Aur Main fails to impress simply because it is not an impressive film.
Ishaan Sabharwal (Abraham) is the manchild protagonist, whose worldview, as the imaginative title suggests, is restricted to himself. A combination of John’s ineptitude at emoting and the film’s patchy dialogue means that he appears more as a cartoon villain rather than a believable rake. Nevertheless, it does not go down well with his girlfriend Anushka (Singh), who promptly dumps him after he forgets to take her to visit his parents. The dumping means that Ishaan has to find a flat of his own, which is where he meets Gauri (Desai), the neighbour with the aforementioned passion for circuits and suchlike. Again, the atrocious writing means this love for science is usually expressed by her saying things like “It’s basic physics: their volume is higher than yours, so they can’t hear you.” Eventually, of course, the two fall in love, before the inevitable, clichéd bombshell, set to the inevitable, clichéd dramatic music, hits just before the interval.
Chitrangda Singh has had her career umbilically tied to the uncanny resemblance she bears to Smita Patil, with every new release inevitably leading to comparisons and rumours of a biopic. In both this film and Sudhir Mishra’s Inkaar she has essayed roles that are at least cosmetically Patilesque, with an intelligent femininity standing her in good stead when confronted by slobbering males used to having their own way. But she has been hamstrung in both roles by lack of depth to her characters, which means that that intelligent femininity is mostly restricted to screaming at her loutish lovers in Received Pronunciation rather than bad Hindi. That is not to suggest that she plays a bimbo, but the immense potential she showed in Hazaaron Khwaishein Aisi is not given a chance to shine through. Of course, unlike Patil, Singh has not restricted herself to the arthouse and is bound by the limitations of commercial cinema, but it’s painful to watch an actor clearly meant for better things play such unidimensional roles. The last thing one wants is for her to endure a career of playing the same role in every movie.
The clunky storytelling is a millstone the film keeps trying to shed through the flakey progressivism it embraces. Some of these attempts, like Ishaan’s mother (Wahab), are subtle and layered. Others, such as Anushka’s decision to (quite literally) show Ishaan the door, are as unimaginative as the title itself. The film seems to be going for the unconventional for the sake of being unconventional, as the characters reject as many social mores as they can in the rather short movie. Ultimately, the film is a missed opportunity at changing perceptions that becomes simply another forgettable frothy mess.
ajachi@tehelka.com 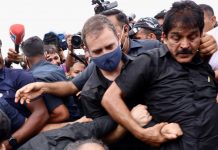