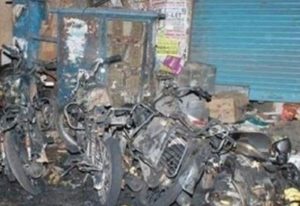 A court on Tuesday held two out of the five accused guilty in a case related to twin bomb blasts at Gokul Chat and Lumbini Park in Hyderabad in 2007, that claimed 44 lives and left 68 injured. The court will pronounce the quantum of punishment on September 10.

Anique Shafiq Syed and Akbar Ismail Choudhary have been convicted. All five accused, allegedly belonging to Indian Mujahideen, were arrested by Counter Intelligence (CI) wing of Telangana Police, who were investigating the case.

The Counter Intelligence (CI) had filed four charge sheets against the five accused, but two accused RiyazBhatkal and Iqbal Bhatkal are still absconding.

Farooq Sharfuddin Tarkash, Mohammed Akbar Ismail Chowdhari, Aneeq Shafique Sayeed, Mohammed Sadiq Israr Ahmed Shaik and Tarik Anjum were arrested by CI and produced before the court on August 27 via video conferencing from Cherlapalli Central Prison, where they are lodged.

The accused were charged under section 302 (murder) and other relevant provisions of the IPC and sections of Explosive Substances Act in the twin blast case that took place on August 25, 2007.