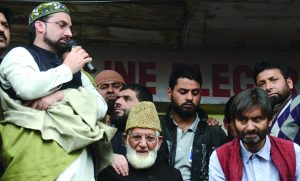 Like their mainstream counterparts, major separatist leaders in Kashmir have also been under detention since the scrapping of Article 370 on August 5. They include top Hurriyat leaders like Syed Ali Geelani and Mirwaiz Umar Farooq, both of whom are under house arrest. The JKLF supremo Yaseen Malik who is a part of the Hurriyat triumvirate along with Geelani and Mirwaiz was arrested and sent to Tihar jail in the run up to August 5 move.

So, unlike during extended 2016 unrest following the killing of militant commander Burhan Wani,  Hurriyat has been conspicuously absent from the scene. The separatist amalgam has been unable to issue hartal and protest calls. Even the few leaders who have not been detained have stayed short of doing it, in the absence of a direction from the top leaders. A few calls for hartal which were attributed to Geelani are believed to have been issued from across the border.

So, people in the Valley were by and large left without any plan of action in the wake of withdrawal of Article 370. Intermittent protests notwithstanding, Kashmir Valley remained eerily calm. Markets remained uninterruptedly shut for four months. Public transport was off the roads. But in recent past, the businesses have started tentatively re-opening and public transport has returned to roads.

Kashmir is now largely normal. Rather the Valley has lapsed into normalcy following a drawn civil disobedience. Both Hurriyat and mainstream leadership have remained disconnected from it. It is difficult to say how the two ideological camps will react once the leaders are released. More so, the Hurriyat which before August 5 had threatened agitation against withdrawal of Article 370.

At the same time, Hurriyat approach towards Article 370 has been marred by some ideological scruples. The amalgam which basically spearheads the movement for freedom for Kashmir occasionally fights shy of advocating for restoration of J&K’s autonomy under India’s constitution. So, an agitation geared to bring back Article 370 is construed as a climbdown from the Azadi bandwagon.

But, in past, Yaseen Malik has defended Hurriyat support for Article 370 on the premise that its withdrawal will pave way for demographic change in J&K and hence undermine struggle for freedom. The amalgam has thus always been at the forefront of the struggle against attempts to tinker with J&K’s special constitutional status but in the name of struggle for freedom.

The detention of top leaders on August 5 has, however, crippled the grouping’s organizational ability. The effort to reign in Hurriyat, however, had begun far in advance of the scrapping of J&K’s special status. In mid-2017, National Investigative Agency initiated probe against separatists for their alleged funding of the militancy and the unrest in the Valley. At the time, the centre only arrested the middle-rung leaders, leaving initially the top Hurriyat trio — Syed Ali Geelani, Mirwaiz Umar Farooq, Yaseen Malik — untouched, albeit it did act against their close associates and in case of Geelani, his family members too. Similarly, the sons of the PaK based supremo of Hizbul Mujahideen Syed Salahuddin were also targeted.

It seems unlikely that the centre will rethink the arrest of the separatist leaders in near term. That is, unless the union government is certain that releasing them wouldn’t adversely impact the existing normalcy in the UT.