When hate-mongers were busy blazing the Twitter with trolling, vilifying women, spewing communal venom, a Samaritan’s tweet in time saved almost 25 girls on board the Muzaffarpur-Bandra Avadh Express from being trafficked on July 5. 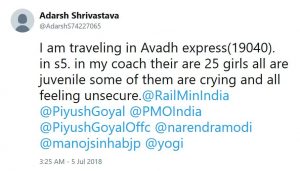 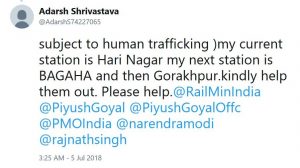 “26 girls were found with two men, aged 22 and 55 years. All of them are from West Champaran in Bihar. The girls were being taken from Narkatikyaganj to Idgah. When questioned, the girls were unable to answer anything convincingly, so they have been handed over to the child welfare committee. The girls are believed to be aged between 10 and 14 years. Their parents have been informed and the men have been taken into custody,” a statement from RPF said.

Samaritan Adarsh Shrivastava who was a passenger on the same train alerted the Indian Railways through Twitter after he grew suspicious of the physical behaviour of the girls. He tweeted,“… some of them are crying and all feeling unsecure. ” Acting on the tweets and without delaying further, the Government Railway Police (GRP), Railway Police Force (RPF) and other officials from Lucknow and Varanasi swung into full action to investigate the matter.

Ever since the news has spread, Twitteratis haven’t stopped congratulating Adarsh for his commendable work. Not only he has turned into a social media hero but has set an example of how digital medium could be effectively used to thwart untoward incidents in future.