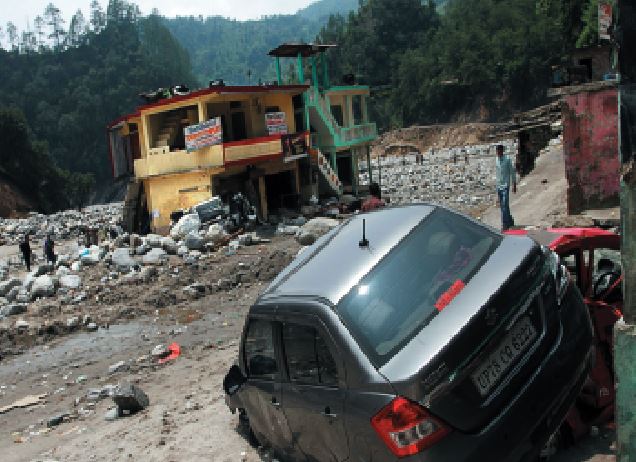 Snow and glaciers are melting rapidly in the Himalayan range due to climate change, altering water supplies in the rivers in the Himalaya-Karakoram (HK) ranges. It is in this context that the glacial lake outburst flood at Joshimath in Uttarakhand has once again put the spotlight on the 1,600 glacial lakes that have formed in Himalayan river basins, reports ANIL MANOCHA

The formation of glacial lakes, which vary in size from five to 10 hectares, has been primarily attributed to global warming and melting glaciers. In the past, an artificial lake formed in a geomorphic depression in the course of Parchu River had burst when rapid glacial melting increased the water level in the river. The lake burst along the Sutlej River had washed away at least 12 bridges in the Kinnaur-Rampur belt and several villages. Value wise, the estimated loss was to the tune of over Rs 1000 crores.It is ample clear that indulgence for control over the natural resources only leads to natural crises akin to present-day plundering of nature.

Effect on one billion people

According to the Ministry of Science & Technology, the “river runoff, glacier melt and seasonality of flow in rivers is projected to increase in future.   The Himalaya-Karakoram (HK) ranges in South Asia, often called the water tower of Asia or the Third Pole is one of the most heavily glacierized mountain regions on Earth. Understanding the response of HK rivers to climate change is crucial for almost one billion people who partly depend on these water resources.

Total river runoff, glacier melt, and seasonality of flow in these rivers are projected to increase until the 2050s, with some exceptions and large uncertainties, according to a study “Glacio-hydrology of the Himalaya-Karakoram” published in the journal ‘SCIENCE’.  The research led by Dr Mohd. Farooq Azam, assistant professor at the Indian Institute of Technology Indore gathered the results from more than 250 scholarly research papers to arrive at a more accurate understanding —something approaching a consensus— of the links between climatic warming, precipitation change and glacier shrinkage.

The study shows that glaciers and snow melt are important components of HK rivers with greater hydrological importance for the Indus than Ganga and Brahmaputra basins. “The Himalayan river basins cover an area of 2.75 million km and have the largest irrigated area of 577,000 km2, and the world’s largest installed hydropower capacity of 26,432 MW. The melting glaciers fulfils the water requirements of more than a billion people of the region who will be affected when much of the glacier ice mass melts throughout this century and gradually stops supplying the required amount of water,” said Dr Azam.

He added “region-wide, the total impact on each year’s water supply varies. Glacier melt water, and climate change impacts on glaciers, are more crucial for the Indus basin in comparison to the Ganga and Brahmaputra basins which are predominantly fed by monsoon rains and are affected mainly due to the changing rainfall patterns.”

Smriti Srivastava, a PhD student of Dr. Azam and co-author of the study said, “Projected trends in river runoff volume and seasonality over the 21st century are consistent across a range of climate change scenarios. Total river runoff, glacier melt, and seasonality of flow are projected to increase until the 2050s, and then decrease, with some exceptions and large uncertainties.”

The work supported by INSPIRE Faculty fellowship funded by the Department of Science and Technology (DST), GoI, identified gaps in understanding the impacts of climate change on the Himalayan water resources, and highlighted prospective solutions to bridge these gaps. This INSPIRE Faculty project had also resulted in a research documentary earlier.

In Himachal Pradesh, the State Council of Science and Technology studies have revealed that rapidly melting glaciers have led to the formation of numerous lakes in the basins of perennial Himalayan rivers, including Sutlej, Chenab, Beas and Ravi and their tributaries, over the last five years and that the number of lakes has been increasing at an alarming rate. Data collected between 2015 and 2018 reportedly shows that there  was a 36% drop in lakes in the Beas basin. However, there has been a 32% increase in lakes in the Chenab basin, 94% increase in the Ravi basin and 97% increase in the Sutlej basin.  An analysis of images captured between 2015 to 2018 revealed that the Sutlej basin has 769 lakes, of which 663 are below five hectares, 57 lakes have an aerial range between five to 10 hectare and 49 lakes extend over 10 hectares.

An additional 127 lakes have sprung up in the basin since 2017, indicating an overall increase of around 16% lakes in the basin.  In the Chenab basin (Chandra, Bhaga, Miyar), 254 lakes were delineated, of which 64 were in the Chandra sub-basin, 84 in the Bhaga sub-basin and 106 in the Miyar sub-basin.

The Chenab basin had 192 lakes in 2015. However, the count had increased to 254 in 2018. Notably, only 55 lakes had been reported in the Chenab basin in 2001.  Aerial measurements indicate that 240 lakes are less than five hectares, 10 between five to 10 hectares and four extend over 10 hectares, which indicates a 20% reduction in bigger lakes.

This should be the future strategy to reduce loss of human lives during glacial lake outburst floods (GLOF), said a study carried out by scientists from IIT Kanpur. The study carried out by Dr. Tanuj Shukla and Prof. Indra Sekhar Sen, Associate Professor from IIT Kanpur, with support from the Department of Science & Technology, has been published in the international journal ‘Science’.