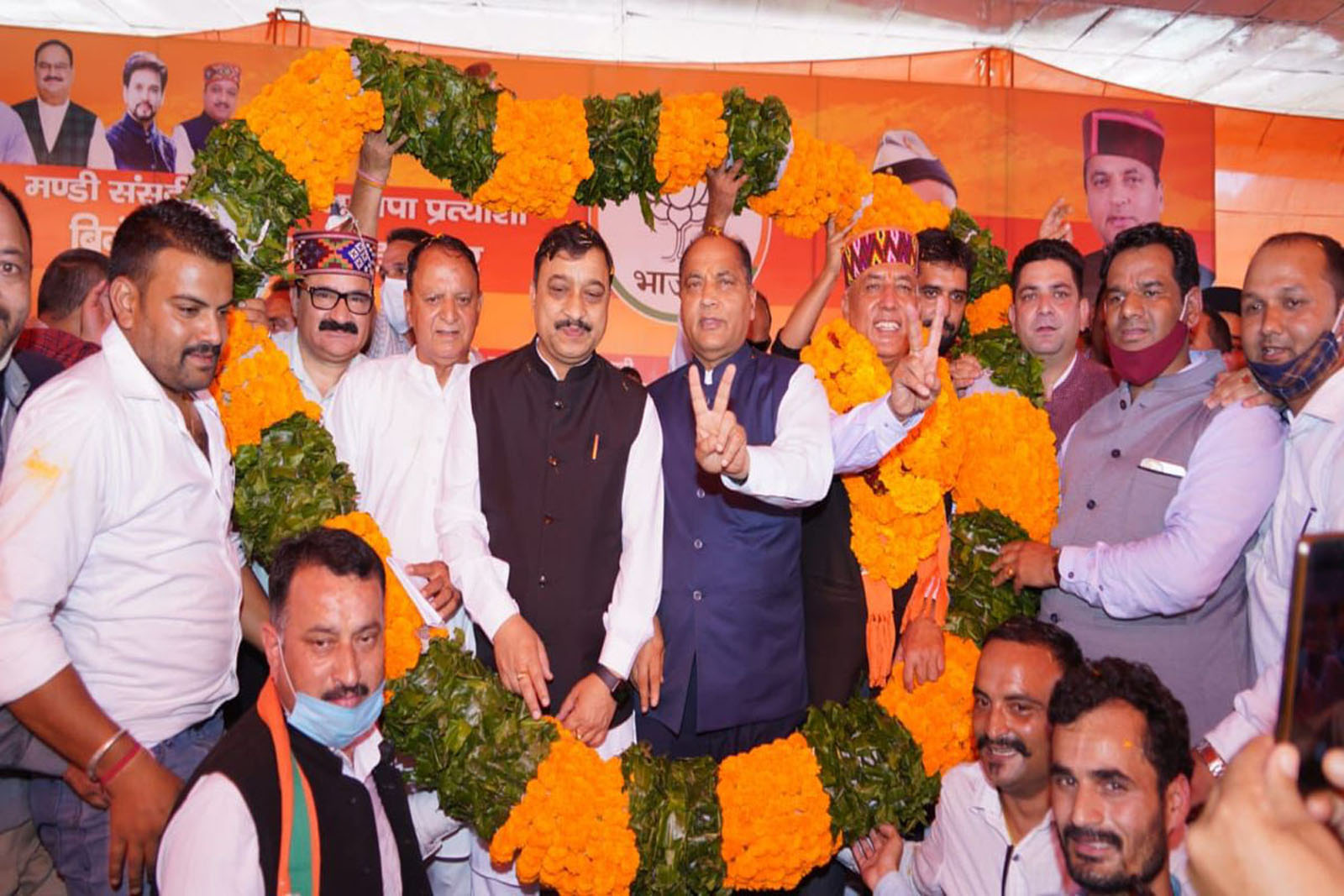 While the by-polls in three assembly and one parliamentary seats in Himachal Pradesh are seen as a semi-final for the ruling BJP government there, the by-election in one seat in Haryana’s Jat bastion would show up its feedback on two years of working of BJP-JJP coalition government in the state, reports Rajesh Moudgil

It is a battle of prestige for political majors in the October 30 by-elections in three assembly seats and one parliamentary seat in Himachal Pradesh and one Haryana assembly seat. The BJP is in power in both the states with the Congress as the principal opposition party.

The results of the said by-elections in Himachal Pradesh would be seen as the referendum to the chief minister Jai Ram Thakur government with the state assembly elections being just about a year away. In Haryana, the by-poll result would reflect the Jat bastion’s feedback on the working of BJP-Jannayak Janta Party (JJP) coalition government which completes two years in office on October 27.

The by-polls in Himachal Pradesh are also crucial for the Congress as it is fighting the elections without any leader of the stature of late Virbhadra Singh. These elections would also be seen as a report card on the poll management by relatively young leaders including Mukesh Agnihotri, who is leader of opposition in the assembly, or state party chief Kuldeep Rathore or other senior leaders like Ramlal Thakur. The party is faction-ridden in several pockets of the state.

From Mandi parliamentary constituency, the Congress has fielded former MP Pratibha Singh who is widow of party stalwart and former six-time chief minister Virbhadra Singh. The seat had fallen vacant after the death of BJP MP Ramswaroop Sharma.

From Mandi seat, the BJP has fielded Kargil war hero Brig (retd) Khushal Singh Thakur who had played a major role in India’s war against Pakistan at Tololing and Tiger Hills. The commanding officer of 18 Grenadiers that captured the Tiger Hills and Tololing, Brig Thakur is a recipient of the Yudh Seva Medal. It is his first election.

In Jubbal Kotkhai, the BJP has fielded former Zila Parishad member Neelam Saraik though the same has come as a setback to Chetan Bragta, son of late Narender Bragta. Chetan had even started campaigning for himself. Saraik had threatened to contest as an independent candidate if denied a party ticket. Hence, bickering within the cadre in the constituency has already set in. Congress has fielded Rohit Thakur, who is grandson of former chief minister Ram Lal Thakur.

In Arki assembly constituency which fell vacant after the death of Congress stalwart and six-time former chief minister Virbhadra Singh, the BJP has fielded RSS-backed Ratan Singh Pal even though former two-time MLA Gobind Ram Sharma and other BJP leaders have already opposed the candidature. Pal had finished second in the 2017 elections against Virbhadra Singh with a margin of about 7,000 votes. Congress has fielded party general secretary Sanjay Awasthi who had fought from here in 2012 and lost to BJP candidate by a margin of about 2,100 votes.

The BJP has fielded Baldev Thakur from Fatehpur seat in Kangra. He had fought as an independent candidate in 2017. The Congress has fielded Bhawani Pathania, son of late Sujan Singh Pathania, who is banking on sympathy vote as well as the backing from the Rajput community. However, both the candidates face challenges from within their respective parties.

A litmus test in Haryana

A keen contest awaits all the three main political parties – BJP, Congress and the Indian National Lok Dal (INLD), in Ellenabad seat by-poll in Haryana.
Ellenabad seat is in Sirsa district, which has traditionally been an INLD citadel. The seat had fallen vacant after INLD’s sole MLA Abhay Chautala resigned from the assembly in January this year to register his protest against the contentious farm laws.

While INLD has again fielded Abhay, the BJP has pitted Gobind Kanda, who is brother of Sirsa MLA and businessman Gopal Kanda, who represents his Haryana Lokhit Party (HLP). Gobind had also unsuccessfully contested from Rania seat in 2019 on HLP ticket. Interestingly enough, Gobind who joined BJP only a few days ago is the joint nominee of the ruling BJP and JJP. Gopal has also extended his unconditional support to the ruling BJP-JJP combine.

The Congress has fielded Pawan Beniwal who had shifted loyalty from BJP. Pawan had finished second on the BJP ticket in 2019 polls. Prior to BJP, Pawan was with the INLD. Even though the BJP had appointed Pawan as the chairman of the Haryana Seed Development Corporation from 2016 till 2019, he quit the saffron party in April this year in support of the agitating farmers against the contentious farm laws.

Abhay had won the seat in 2019 assembly election by polling 57,000 votes, the BJP’s Pawan Beniwal finished second with about 45,000 followed by Congress’ Bharat Beniwal who gathered about 35,000 votes. The JJP had fought elections separately in 2019 and its candidate O P Sihag could muster only about 6,500 votes. Abhay resigned from the assembly in January this year in protest against the Central farm laws.

Even though Pawan enjoys the support of state Congress president Kumari Selja, he might face resentment from the supporters of the Congress’ former candidate Bharat Beniwal who had finished third in the previous election.

Abhay has won the Ellenabad seat thrice – 2010 by-election, 2014 and 2019 – while his first win was from Rori assembly seat in 2000.
His victory was despite a crippling split in the INLD in 2018 after his elder brother Ajay and his family members formed a separate outfit – Jannayak Janta Party (JJP) which forged an alliance with BJP after the elections in 2019, and which is a partner in the ruling coalition government.

However, after the release of party supremo Om Prakash Chautala from Tihar Jail on the completion of his jail term in the JBT recruitment scam case about three months ago, the INLD has had a fillip and has been holding rallies to retain its slipping base.

Even though the BJP-JJP combine would have an advantage of being in power, it has been facing raging farmers’ protests across the state.
The counting of votes of all the said by-elections would take place on November 2.

Who would and how would the TRP of TV channels be...