Whenever Prime Minister Narendra Modi addresses the nation, there is an anticipation of an epoch making announcement. Little doubt that when the Prime Minister addressed the nation on October 22, people were in awe or fearing for the unknown. However, the announcement came as a pleasant surprise as it was about achieving the unique milestone of 100 crore vaccinations.

The highlights of the PM’s announcement were that the “100 crore vaccinations are not just a figure, but a reflection of the strength of the country, but a success of India and the success of every countryman. The PM observed that if If the disease does not discriminate, then there cannot be any discrimination in the vaccination. That’s why it was ensured that the VIP culture of entitlement does not dominate the vaccination campaign. He claimed that the acceptance that India enjoys in the world as a pharma hub will be further strengthened.”

The PM claimed that the Government made public participation the first line of defence in the country’s fight against the pandemic. The entire vaccination program of India has been Science-born, Science-driven and Science-based. Today not only are record investments coming in Indian companies but new employment opportunities are also being created for the youth. With record investment in start-ups, unicorns are emerging.  He, however, had a word of caution when he said that, “No matter how good the cover is, no matter how modern the armour is, even if armour gives a complete guarantee of protection, weapons are not given up while the battle is on. There is no reason to get careless. Celebrate our festivals with utmost precautions.” 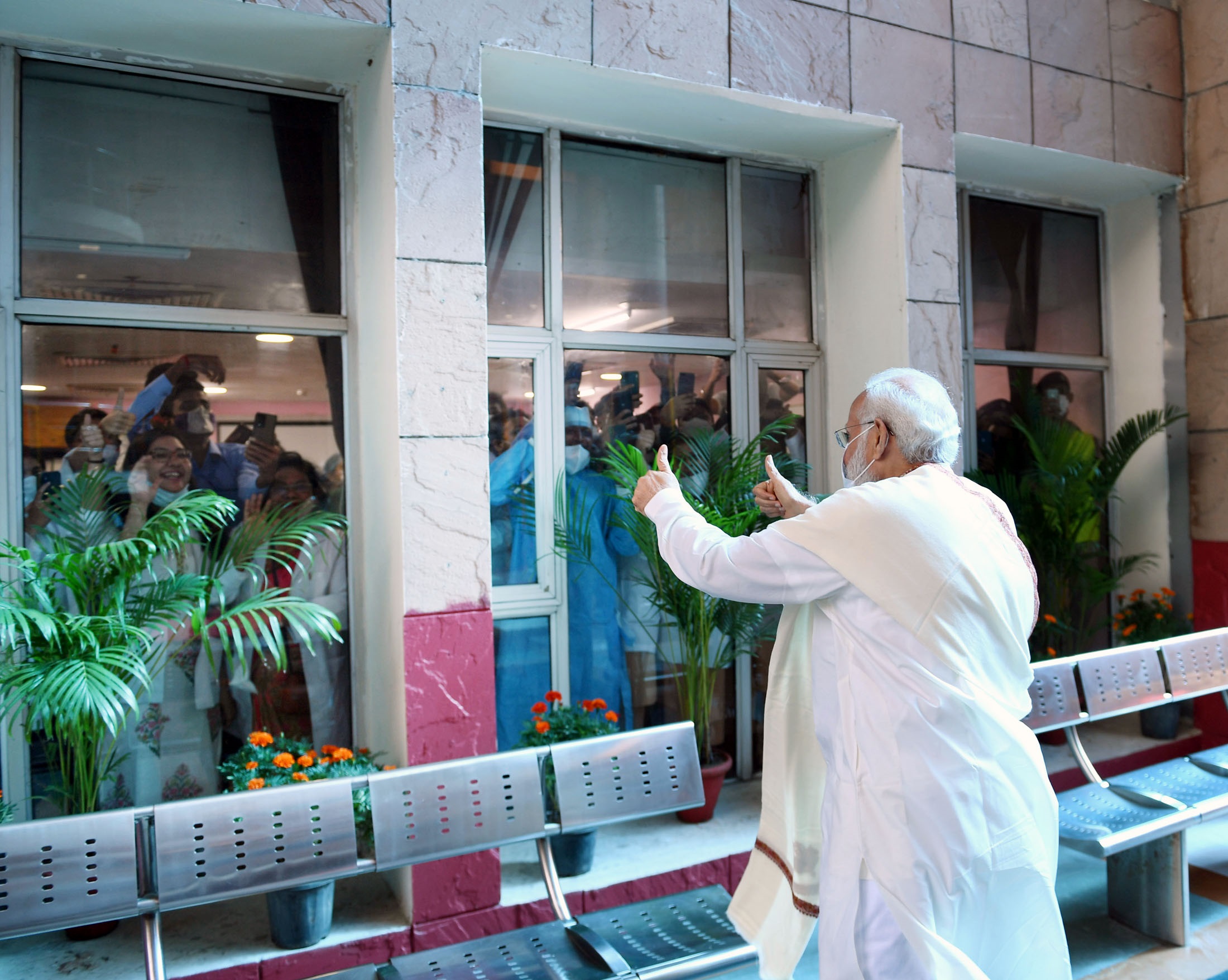 Addressing the nation, the Prime Minister lauded the difficult but remarkable feat of administering 100 crore vaccine doses. He attributed this achievement to the dedication of 130 crore countrymen and said this success is the success of India and the success of every countryman. He said 100 crore vaccinations are not just a figure, but a reflection of the strength of the country. It is the creation of a new chapter of history. This is a picture of a new India that sets difficult goals and knows how to achieve them.

Many people are comparing India’s vaccination program with other countries of the world.  The PM said the speed with which India crossed the 100 crore mark, one billion, is also being appreciated. However, he pointed out, in this analysis the point of beginning for India is often missed. He said developed countries had decades of expertise in researching and developing vaccines. India mostly depended on vaccines made by these countries. He said for this reason when the biggest pandemic of the century struck, various questions were raised about India’s ability to fight the global pandemic. Questions like, from where will India get the money to buy so many vaccines from other countries? When will India get the vaccine? Will the people of India get the vaccine or not? Will India be able to vaccinate enough people to stop the pandemic from spreading? were answered by achieving this feat of administering 100 crore vaccinations. He stressed that India has not only administered 100 crore vaccine doses to its citizens but has also done that free of cost.

The achievement means the acceptance that India enjoys in the world as a pharma hub will be further strengthened. In fact at the beginning of the Corona pandemic, people were anxious that it would be very difficult to fight this pandemic in a democracy like India. Questions were also raised whether so much restraint and so much discipline work here? The country started the campaign of ‘Free Vaccine and Vaccine for Everyone’. Vaccinations were given to Poor-rich, Rural-urban alike. He remarked that the country has only one mantra that if the disease does not discriminate, then there cannot be any discrimination in the vaccination. He said that’s why it was ensured that the VIP culture of entitlement did not dominate the vaccination campaign.

Questions were raised that most of the people in India would not go to the vaccination centre to get vaccinated. Vaccine hesitancy remains a major challenge even today in many major developed countries of the world. But the people of India have answered it by taking 100 crore vaccine doses. He said a campaign is ‘everybody’s effort’ and if everyone’s efforts are synergized, the results are amazing. He said that the Government made public participation the first line of defence in the country’s fight against the pandemic.

The challenge was also a need to scale up the production. After that, distribution to different states and timely delivery of vaccines to far-flung areas. But, with scientific methods and new innovations, the country has found solutions to these challenges. Resources were increased with extraordinary speed. He said the Cowin platform, made in India, not only gave convenience to the common people but also made the work of our medical staff easier.

The Prime Minister said the country knows how to set big goals and achieve them. But, for this, we need to be constantly careful. He stressed that no matter how good the cover is, no matter how modern the armour is, even if armour gives a complete guarantee of protection, weapons are not given up while the battle is on. Similarly, he said there is no reason to get careless. He requested the people to celebrate our festivals with utmost care.