A Dalit family was the first to donate organs in the state when the government had initiated the Mrithasanjeevani programme in 2012. However, their laudable efforts did not receive enough media coverage for the masses to know their story.
The news of the organ donation of the Thiruvananthapuram based lawyer Neelkanta Sarma has gained much media attention recently. With media calling it an exemplary act for the society. However, an ordinary Dalit family had set an example way back in 2012 by donating the organs of their deceased mother. In August 2012, when the state government launched its Deceased Donor Organ Transplantation programme the family of Sarasamma (60) donated her kidney and cornea marking the beginning of the organ donation movement in the state. In addition to this, nine of the family members chose to donate their organs in the event of death.
They had decided to opt for organ donation after Sarasamma died at the medical college hospital in Thiruvanathapuram. Sarasamma was a worker in a cashew nut factory and was declared brain dead after she collapsed at her home. When the doctors asked her daughter Sasikala whether she would be willing to donate her mother’s organs, she agreed. Sasikala decided to give her a tribute by donating her organs to those in need. Thus, the first cadaver organ transplantation in the state took place at the college hospital. Meanwhile, Sasikala and her husband, Sunil kumar, a daily wage employee with the state transport corporation, along with their relative, Anil Kumar, informed the hospital that they were also willing to give their organs after death. Other relatives also come forward to donate their organs on the same day.
When Tehelka went to meet the family at Kollam recently, Sunil and Sasikala looked happy. “At least some people are remembering my mother and her family for what she had done. This makes us happy,” say the two. Sunil said that it is the attitude of the people that needs to change. “Though we have attained cent percent literacy, we lack a broader mind,” he says.
He recounted how his family was subjected to mockery by the society which accused them of donating their mother’s organs in exchange for money. “They treated us more like culprits who had done some heinous act,” says Sunil.No ministers or local politicians visited them to congratulate or comfort them during that time.
Sasikala also expresses her appreciation of Neelkantha’s wife Latha in readily opting for organ donation. “She has shown a good example to the society. More and more people should come forward in donating organs for the needy,” she says.
[/box] 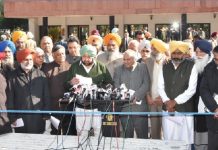