BEFORE HE began to shoot for Rockstar, filmmaker Imtiaz Ali had been having nightmares of an unusual kind. He had been worried about the styling of his characters. Ali wanted a designer, who could be the “soul of a filmmaker, and one whose clothes add a history to your story”. The filmmaker soon realised that his vision could be brought to life by Aki Narula. “Recently, I had an emotional chat with Aki and told him that his clothes made my characters believable. He pulls out things from thin air, without much cost, and dazzles you with his vision. Despite being so intensely involved in fashion, he hasn’t lost interest in people, and that’s super important,” says Ali.
Designing for Rockstar was a day’s work for the 41-year-old designer. The trailer has a young Ranbir Kapoor sporting the small-town denim-and-sweater combination and later, pathani-style kurtas with arm bands in his rockstar avatar. One can’t miss the modesty with which Narula says, “I dress the character in what the character can afford. Maybe the character has a pushy mother who buys his clothes — so I become that pushy mother.”
Bollywood styling also needs a pushy mother every now and then to raise the bar. With his simple yet hard-to-pull-off design aesthetic, Narula has played an important role in defining the new Bollywood chic, a contribution that has made him one of the most sought-after fashion designers in the industry. This explains a rather elaborate film calendar that includes forthcoming releases such as Rockstar, Agent Vinod, Ladies vs Ricky Bahl, Barfee and Housefull 2.

Narula, though, is no stranger to such popularity. He began his career as a fashion designer in Kolkata in 1994 and launched his own brand, Aki, in 1996. It was known for its unusual and out-of-the- box collections (in 2003, his models walked the ramp in ribbed shirts and embroidered underwear, and kissed each other). In 2000, he participated in Lakme India Fashion Week (a year after which his whole collection was lapped up by Selfridges UK) and, in 2002, he was appointed the design director at Sheetal Design Studio. By then, Bollywood had come calling. In 2005, he designed clothes for Yash Raj Films’ Bunty Aur Babli, a film that changed the way we saw Patiala salwars and kurtis.

Cut to present. As he sits in a Bandra café, sipping beer, his mind still seems to be ticking. A few minutes later, he tells hairstylist Sapna Bhavnani the vision he has for her mannequins at her salon. “I think we should use that blue jumbo bags that all stylists use, the typical theli to create an outfit.” One wonders how a designer, who spots beauty in a blue plastic bag, can design for Bollywood where conforming to average glitter is often the only way to succeed. “It all depends on how you start. I did Bunty Aur Babli because Aditya Chopra believed in me. He convinced people to work with me, and then actors realised that the out-of-the-box stuff I suggest does work. I bought fake Nike tees for Abhishek (Bachchan), and for Shah Rukh (Khan) in Rab Ne Bana Di Jodi, I only shopped from Sarojini Nagar. But that’s the way I see the character. And I am a fighter on the sets — there is no bling if it’s not needed,” he says.

‘Aditya Chopra convinced actors to work with me. They soon realised the out-of- the-box stuff does work. I’m a fighter on the sets — there is no bling if it’s not needed,’ says Narula

Although he won’t conform, he admits keeping away from movies to protect one’s art is a silly notion, one that could set limits to a designer’s imagination. Anjana Sharma, head of Fashion, IMG, puts it succinctly, “Aki’s edgy, and very real. He’s not over the top. And that’s why he works so well in Bollywood. He can cater to the masses very well.” There is truth in that admiration: one does remember the tailors across the country busy stitching the patialas and tight shirt kurtis worn by Rani Mukerji in Bunty Aur Babli. With Kareena Kapoor in a lime green bikini in Tashan and Priyanka Chopra in a disco-inspired silver mini in Don, who can possibly deny that Narula has given us images that people won’t forget in a hurry.
Does that mean he has abandoned the fashion industry for Bollywood? “They are equally challenging. But if I have to design a line, I need to take three months off, and I don’t have that kind of time. Maybe next year,” he says. He did return to his roots this year as he agreed to play mentor to the Lakmé GenNext designers. It’s been two seasons now, and the shows have been touted as the best ever in the history of Lakmé Fashion Week. Sharma says, “He is so young and child-like that the new designers don’t get intimidated. And he pushes the boundaries for them.” An evidence of this could be seen in this year’s show where he choreographed designer Urmi Ghosh’s show inspired by artist Pablo Picasso’s muse Dora Maar, in which models walked like schizophrenic rag dolls. He also layered to perfection designer Mohammed Javed Khan’s shabby chic collection. Khan says he was sceptical about Narula’s methods at first but when he saw the final product, he knew it was going to be fine. Ghosh says, “He understood my thought process and brought it out in his choreography. He was also available the whole time I was designing the line. I could call him up in the dead of the night with my anxious thoughts. He became a friend.”
FOR NARULA, being there for Ghosh at midnight is a way of giving back to the industry. As you watch him culling out the details meticulously and tirelessly at the dressing room, and then later at fashion week, standing by watching the GenNext models walk down the ramp, you realise fashion is a serious business for Narula. “I had no formal training when I started. I learnt everything on the go. But people were supportive and I was appreciated. It’s my time to give back. I love playing mentor because it excites me to see this kind of talent in India. It makes me believe in the future of fashion.” But what about its current standing in international fashion? “Japanese designers are big in Europe as they mix Japanese sensibilities with modern designs. They don’t say: this is a kimono and now that’s the design. Indian designers need to learn from that. I only see a handful of designers who sell well abroad, because Indians still can’t do prêt. My question is ‘what is so damn exciting about you?’ Here, there is great fabric and finish but that just translates into great pricing. When will we do chic $10 tees?”

The walk, though long, has been sweet so far for Narula. From being a child who would tell his mother which chiffon sari to wear with her pearls, a young adult who wore ties to meetings (he still can’t believe he did) during his advertising phase to metamorphosing into a fashion maverick, Narula has come a full circle. To wear an Aki Narula, you have to think like Aki Narula. As Imtiaz Ali asserts, “Aki doesn’t design clothes. He designs people.”
Aastha Atray Banan is a Senior Correspondent, Mumbai with Tehelka.
aastha@tehelka.com 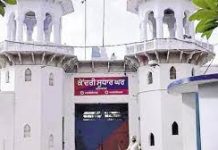