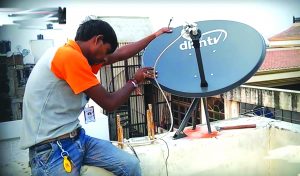 The ZEE, SPN, Viacom18, and TV18 have converted all their free-to-air channels into pay channels. Cable and satellite TV providers are ringing in the New Year with an unwelcome gift that is higher cable bills. Over the past decade, prices for TV service have risen almost twice as fast as inflation, according to an analysis of government data. Data provider S&P Global Market Intelligence says customers’ cable and satellite TV bills have soared 53 per cent since 2007.

Of television broadcast networks, including Star, Zee, and Sony Pictures, have decided not to offer their channels in the basic pack of cable and DTH operators. This will be a shock for viewers who were expecting a drop in their monthly cable or DTH bills. Reason-many of their favourite channels will not be available in the basic pack capped at 130 (plus taxes) by the Telecom Regulatory Authority of India (TRAI) in its tariff order.

However, according to Airtel Digital’s tariff card, almost all the HD channels are priced between 50 and 60 per month per channel. Tata Sky’s pricing is more flexible, ranging from 25 for regional channels to 75 for sports channels. Videocon D2h, too charges between 23 and 60.  In other words, if you were to subscribe individually to 50 HD channels, it would cost you around 2,500 per month.

It’s probably no surprise that pay-tv packages were more expensive in 2018 than in 2017. And TV packages would be even more expensive in the year 2019 vis-a-viz 2018. But what’s less obvious is that while providers announced only modest increases in 2018 — generally in the 3 to 4 per cent range — they’re continuing to impose add-on charges, such as “broadcast TV fees” and “regional sports fees” that are quietly inflating your TV’s monthly outgoing amount. To add to it the Zee Entertainment Enterprises (ZEE), Sony Pictures Networks India (SPN), Viacom18 and TV18 are among networks that have converted all their free-to-air channels into pay channels.

And often these additional fees can be imposed even if you’re locked into a promotional rate for TV service.

No price hike is welcome, the consumers expect the companies to absorb some of the increased programming costs instead of passing them on to consumers.

The real money for cable companies these days are in selling bundles that include TV programming, internet access, and perhaps phone service. The traditional cable and satellite services tend to offer larger packages to households that have more TVs and want more options in programming.

Many services come at a higher monthly cost. Service providers are focused on the majority of customers that get a bundle of services, most significantly Internet service, rather than the few that only get TV service from them. Star India has challenged the Madras High Court order in the Supreme Court, and the apex court is hearing on the matter. Except for Star India, most broadcasters have complied with the tariff order by announcing their respective reference interconnect offer (RIO) documents, listing the maximum retail price of channels and bouquet rates.

If the Supreme Court order is in favour of TRAI, broadcasters will have to sign their interconnect agreements with cable and DTH companies by December 27 and comply with the new tariff order, which offers consumers the choice to get first 100 channels for not more than 130. Out of these 100 channels, 26 are mandatory Prasar Bharati channels and we expect a rush among broadcasters to pay to get in the remaining 74 channel slots.

However, there is a good news for the subscribers. The new rules on the pricing of television channels are likely to make the viewing of HD and sports channels in India cheaper and make charges such as ‘HD Access Fee’ totally illegal. The rules have already been issued and come into effect after being published in the Gazette.

The most important of the new rules is the imposition of a price cap of 19 on all channels, HD or otherwise. The only way for any broadcaster to price its channel above 19 will be to take it out of all packages and sell it only as an individual channel — something that is practically impossible given the market situation.

As a result, the maximum price that any cable or DTH operator can charge for a single channel has, in effect, been capped at 19 per month. This is far below what cable and DTH operators are charging right now.

Under the new system notified by TRAI, it would cost only a maximum of 950, but the actual number is likely to be much lower as explained below.  At present, individual channels are priced very high so as to discourage subscribers from purchasing channels one-by-one and instead go for one of the operators’ ‘packs’ — such as Gold, Diamond or Platinum.

When anyone subscribes to a ‘pack’, the DTH or cable operator is able to sell several extra channels as part of the pack in addition to the channel that the subscriber is looking for. In return for selling these ‘unwanted channels’, the DTH or cable operator gets money from the owners of those channels. As such, they are keen to sell their channels in packs and never in the form of individual channels.

The new rules are designed primarily to address this issue of thrusting unwanted channels down consumers’ throats in the form of bundling.

Right now, the price of a pack of 40-50 HD channels ranges between 225-300 per month — or about 6 per channel. The reason it is kept at this level is that if it is increased much beyond this range, consumers may disconnect or look for other options. So, if the overall price of the HD pack has to be maintained at the same range, the average individual selling price of these channels cannot be more than 7.05 per month due to the new 85% rule.

For example, if the individual price of these channels is 10 per month, then the total HD pack price will rise to 340-425. If the price is hiked to that extent, many HD subscribers will simply exit the pack and purchase 20 of these channels individually, which will cost them only 200 per month. This is because most subscribers do not ‘need’ all 40-50 HD channels they get, but consume only about half of them.

Under the new rules, cable and DTH companies can charge money under only two headers that are basic subscription and pay-channel charges.

At present, subscribing to all required packs to get all the channels that the subscriber wants costs between 500-700 per month.  The problem of bundling is more acute on platforms like Tata Sky, which charges something known as ‘HD Access Fee’ to watch HD content. In the case of Tata Sky, the HD Access fee is Rs 175 per month on top of the pack charges.  Under the new scheme, all HD Access charges become illegal as they are neither capacity charges nor pay-channel charges.

The service providers can charge less if they wish to but not more as per the new rules. For example, Star Sports 1 HD is priced at 19 per month, the DTH operator is free to sell it at 10 per month if it is willing to take the loss. Similarly, it can charge less than 130 as its basic charge. Because of the way they have been framed, the new rules are likely to force many channels to reduce their subscription charges to zero.