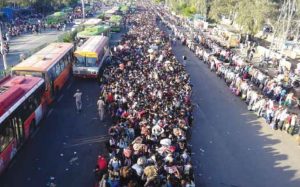 The Central government’s social distancing idea to fight the coronavirus pandemic got turned upside down when thousands of panic-stricken migrant workers were seen crowding Delhi’s inter-state bus terminals, mainly the one at Anand Vihar, soon after the announcement that the UP government was arranging 1,000 buses and Delhi’s Kejriwal government 200 DTC buses to ferry them home. How pathetic scene it was to witness that these hapless people appeared to be the least bothered about the threat of getting infected by the highly contagious virus while jostling to somehow reach their near and dear ones at their far away native places  small towns and villages in UP, Bihar and beyond to first save themselves from dying of starvation.

Their fear of starvation death appeared to be more overpowering than the coronavirus scare. After all, they were not only acutely short of money because of having been rendered jobless, they also had no place “to stay indoors” during the 21-day country-wide lockdown declared by Prime Minister Narendra Modi on March 24.

Did it occur to the Prime Minister that his 8 pm announcement on March 24 for a country-wide lockdown, beginning with 12 midnight the same evening, could lead to a massive exodus of thousands of daily-wagers, the migrant workers, who normally spend their days and nights at their work places? Despite his government’s assertion to the contrary, a close study of his televised address to the nation makes one believe that he had little idea of what the country would face immediately after his announcement.

First of all, television channels showed hundreds of jobless workers braving to walk back home in the absence of any transport facility in the aftermath of the lockdown. The walking workers were seen being mercilessly punished by police personnel. Some were even sprayed with chemicals to sanitise them as if they were no human beings. Yet they refused to end their long walk. They kept on walking to reach back home, covering hundreds of kilometres in this manner.

Those who were yet to begin their long walk back home rushed to bus terminals in their thousands the moment they came to know of the availability of bus services. That they had to undertake a long and arduous bus journey sitting cheek by jowl was not as big a problem for them as it was to walk for days together to reach their native places.

All this raises a big question: How did the Prime Minister and his advisors miss to visualise the aftereffects of the lockdown in the form of mass exodus of workers? His decision created another major crisis, which could have been avoided with a well thought-out plan?

His appeal to the people “to continue staying where you are right now in the country” makes one clearly understand that his worries then were the worries of India, not of Bharat, where an overwhelming majority of the citizens live! How sad!

According to the 2011 Census figures, nearly 70 per cent of India’s population  over 80 crore  lives in the country’s villages. The percentage might not have changed much since then. Most of those in village India  derisively called Bharat  are poverty-stricken people. They shift to cities for their survival in the absence of work in the rural areas. It is these villagers who can be seen working at construction sites, showrooms, small shops, shopping malls and in the houses of those who can afford to hire them as domestic help. A large number of these villagers can also be found in the services sector, engaged on a contract basis. Some of them live in rented accommodation, but an overwhelming majority of them — like those working at construction sites  spend their after-duty hours at their work places.

When Prime Minister Modi declared the country-wide lockdown, giving the people only four hours to prepare for the 21-day-long ordeal, he should have given a serious thought to what would happen to the poor workers. Before the country went ahead with the stoppage of almost all kinds of economic activity, excepting that which falls in the essential services category, an elaborate plan must have been ready for providing shelter and food to these poor people, who lost their jobs and had virtually no money to take care of their minimum needs.

They should have been given at least two days’ time to shift to their native places, though this would have meant putting their lives in danger as a result of possible coronavirus infection. The infection risk involved in this strategy, however, would not have been as big as it was in transporting lakhs of workers in suddenly arranged buses by the UP government (1000 buses) and the Delhi government (200 buses).

This approach of handling a serious problem as seen in the case of the coronavirus pandemic threat resembles that adopted when the Prime Minister announced the government’s demonetisation programme, giving little time to people to prepare for leading their life after the decision was implemented. Then also the hardest hit were the poor, those on the margins of society.

Any step taken to handle a crisis like the Covid-19 pandemic threat the country is currently faced with can never be appreciated if the problems of the poor are not taken into consideration. After all, the poor in India constitute 68.8 per cent of the total population, according to the figures available today. This means two-thirds of Indians belong to the poor category who live on less than $2 a day.

Shamefully, over 30 per cent Indians survive on less than $1.25 a day  which means they are extremely poor. Thus, it is not surprising if India even now is home to a major chunk of the world’s poor.

They shift to metropolises and other big cities in search of livelihood, but most of them always maintain their link with their villages. Their base in the villages serves as their spine. The exodus of workers from cities like Delhi, Mumbai and Bengaluru to their villages provided proof of this reality. Their assertions that they must be allowed to reach their native places even if they had nothing to eat there were not without meaning. The assurances given by the Centre and state governments that they would not be allowed to go hungry in the cities whether they had been working were not much comforting for them.

The situation became so serious that the Prime Minister had to apologise to these workers. His apology would carry meaning only if in future he gives priority to the problems of Bharat before deciding to implement any scheme in the larger interest of the nation. The government must have a well thought-out scheme ready to take care of the requirements of the poor when the 21-day lockdown ends and a staggered exit strategy is unfolded, as has already been announced. 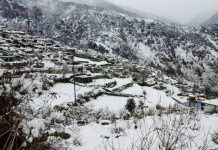 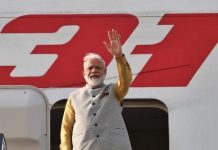