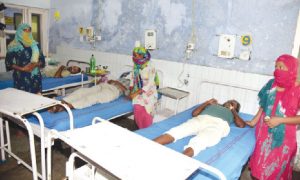 Since July 29 to date as many as 121 persons have died after consuming spurious liquor leading to not only opposition but ruling Congress party’s own MPs alleging that bootleggers were being provided political patronage by the government.

It was a tragedy waiting to happen but what has happened thereafter nobody could imagine. The Shiromani Akali Dal President, Sukhbir Singh Badal led a SAD-BJP deputation to Punjab Governor, V.P. Singh Badnore urging him to dismiss Capt Amarinder Singh government in Punjab for the deaths of 121 persons in the worst ever hooch tragedy in the State. However, troubles further mounted for the chief minister, when two Members of Parliament (Rajya Sabha) belonging to ruling Congress in Punjab stepped up criticism of the chief minister.

Now there seems no end in sight as the government has withdrawn Punjab Police security cover provided to one MP who was formerly President of State Congress. To fish in troubled waters, Shiromani Akali Dal has threatened to hold protest outside the residence of Congress leader, Sonia Gandhi shortly in Delhi.

When we go to the background of the story, we find that the lockdown had triggered a boom in demand and supply of liquor in Punjab. This was the time when spurious liquor was being sold with impunity in Punjab. The result is that first five deaths were reported on July 29 and by now 121 people have died in three districts of Punjab after consuming spurious liquor manufactured by a Ludhiana-based paint shop owner Rajesh Joshi. He is a key suspect in the case and is currently on the run.

Punjab Police have managed to arrest over 50 people involved in the worst hooch tragedy Punjab has witnessed in three decades. One of the people arrested is Moga-based hand sanitizer maker Ravinder Singh.

Singh, who owns a mechanical jack factory, had purchased three drums of the spurious liquor worth 11,000 per drum. Each drum had 200 litres of liquor. Singh’s total cost in buying the three drums was 33,000.

Police also arrested Singh’s business partner Ashwani Bajaj, who runs a paint store in Moga. Ravinder Singh had sold all three drums of spurious liquor to a person identified as Avtar Singh, who then sold it to another man identified as Harjeet Singh, a resident of Pandori Gola village in Tarn Taran. Harjeet Singh’s sons Satnam and Shamsher also knew about the deal. Harjeet Singh paid 50,000 to Avtar Singh and promised to pay the balance later. But to earn a greater profit, Harjeet and his sons further diluted the alcohol to earn money.

Police officers investigating the case said Satnam and Shamsher diluted the alcohol and further sold 42 bottles for 6,000 to Govinder Singh. He also diluted the liquor and sold 46 bottles of it. Govinder sold it to the sons of Balwinder Kaur, who is a resident of Muchhal in Amritsar on July 28 and 29. Kaur has already been arrested. She allegedly mixed 50 per cent water in the alcohol and sold it to over a dozen people. At least 12 people who consumed the liquor died in Muchhal.

Immediately, the state government came under attack from opposition Shiromani Akali Dal and Aam Aadmi Party (AAP), who called the SIT probe into the hooch tragedy a mere eyewash. They also alleged that some Congress leaders including a cabinet minister, a former minister, the Punjab CM’s religious advisor’s relatives and four party MLAs were running the liquor business in the state. “The SIT is just an eyewash. We demand a judicial probe into the deaths as the liquor mafia is being patronised by the Congress-led government,” said Akali Dal general secretary and spokesperson Dr Daljit Cheema.

While opposition parties were expected to raise the issue, what added to the woes of the chief minister is that rivals from his own party, Congress Rajya Sabha MPs Pratap Singh Bajwa and Shamsher Singh Dullo, have shot off letters to governor V.P. Singh Badnore complaining that the state government is ‘hand in glove’ with the liquor mafia. Both Bajwa and Dullo are considered close to Congress high command. These two have sent letters to the governor that the two departments responsible for checking smuggling of liquor-excise and home — are with the chief minister. Dullo alleges that he had warned the state government earlier too but no action was taken.

Significantly, both Bajwa and Shamsher Singh Dullo sought a probe by the CBI and the Enforcement Directorate into the alleged illegal liquor trade in the state following the hooch tragedy that claimed 121 lives. On its part, the state Congress unit has written to its central high command recommending the expulsion of the two MPs for anti-party activities.

Interestingly, in a swift action, the Punjab government has decided to withdraw state police cover given to Congress MP Pratap Singh Bajwa after an assessment showed that he had virtually no threat perception and was, in any case, now getting the central security directly accorded to him by the Union Home Ministry.

An official spokesperson said that the state police security cover provided to Bajwa had become redundant since he had procured personal security directly from Home Minister Amit Shah. “A mixed security component was, in any case, not considered good, particularly when the Rajya Sabha MP had, by opting for central security, showed that he had no faith in the state police,” the spokesperson for the Punjab government said.

According to the spokesperson, contrary to claims made by Bajwa, the central security he had got was not at the behest of the Congress leadership. In fact, according to Punjab government sources, the Union Home Ministry did not even consult the state government to gauge the threat perception, which is usually done before providing central security to any person.

“Bajwa, as Rajya Sabha MP, may have simply approached the party’s leader in the House, Ghulam Nabi Azad, to seek central security, and as is the norm, the latter could have sent his request to the Union Home Ministry. However, for some reason, the Home Ministry chose not to discuss the matter of Bajwa’s threat perception with the state government in this case, which was a clear deviation from the norm followed in such cases,” the spokesperson said.

The spokesperson further said that Pratap Singh Bajwa has actually been getting enhanced security from Punjab Police all this time, way beyond what he was entitled to as Rajya Sabha MP. This was because the state government decided not to withdraw the greater security he had at his disposal as president of the Punjab Pradesh Congress Committee (PPCC). Ideally, the enhanced security cover should have been pulled as soon as he became MP since he had virtually zero threat perception.

Pratap Singh Bajwa was given Z-Category security cover by the MHA on March 19 and as of date has 25 CISF personnel for personal security, house protection and escort, besides 2 escort drivers. Till March 23, he also had 14 PP personnel deployed with him but a few for withdrawn for Covid duties. He currently has 6 PP personnel and an escort with a driver, which are now being withdrawn, said the spokesperson.

Hardening his stance, Bajwa, on the other hand has demanded immediate removal of CM Amarinder Singh and Punjab Congress president Sunil Jakhar “in the interest of the party” and said, “If the CM and state chief are not removed, the party will be obliterated in Punjab.” 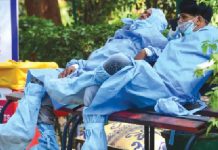