Shah and Nadda arrived on separate flights. They were received at the Guwahati airport by Chief Minister Himanta Biswa Sarma and his cabinet colleagues, Union Minister Sarbananda Sonowal, state BJP president Bhabesh Kalita, and party MPs from the state.

Shah is scheduled to chair a high-level official meeting on the annual floods in Assam, and also hold discussions with the BJP’s Assam core committee at the state guest house later in the evening.

On Saturday, Shah along with the BJP president will inaugurate the party’s newly-constructed state office at Beltola, and also address a rally of party workers at the Khanapara Veterinary Ground.

Nadda will then depart from the state, while Shah will proceed to hold a meeting on narcotics with the chief ministers, chief secretaries and director-generals of police of Northeastern states.

He will also chair a review meeting on the North Eastern Space Application Centre (NESAC) on Saturday evening.

Shah will offer prayers at Kamakhya Temple on Sunday morning, and address the plenary session of the North East Council (NEC) at the Administrative Staff College.

He will leave for Dergaon in Golaghat district to inaugurate the state-level superintendents of police conference on Sunday afternoon. He will then leave for New Delhi from Jorhat airport. 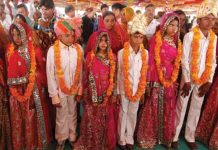