Hizbul Muhajideen top terrorist Saifullah was killed on Sunday during an encounter in Rangreth area of Srinagar.

According to reports, Police got information that some militants are hiding in the area in Rangreth. A joint operation was launched by Police, CRPF and Army.

Chinar Corps, Indian Army in a tweet said, “Op #Rangreth, #Srinagar. One terrorist eliminated. One AK and one Pistol recovered. Joint Operation over.”

Jammu and Kashmir DGP Dilbag Singh termed the killing of Saifullah a success for the security forces. “After the killing of Riyaz Naikoo, Hizbul Mujahideen was rendered leaderless. It is in the same position again after elimination of its chief commander who was running the terror machine of Pakistan here. Dr Saifullah who was number one commander of Hizbul Mujahideen has been killed in the encounter. It was a very successful operation.” 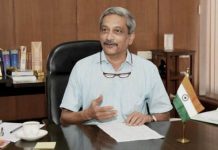