If everyone born and living in India is a Hindu, then what would you call the people born and living in Nepal — the only Hindu country in the world? The definition of the word ‘Hindu’ given by some politico-religious organizations reduces Hinduism to a mere geographical identity and it no longer remains what most Hindus like to believe it is — a religious denomination. There are Hindus born and living in Sri Lanka, Burma, Mauritius, Malayasia, Indonesia and also in the countries of European, African and American continents. Surely, they are not Indians. If all Hindus are Indians, then, the Hindus who are nationals of other countries are placed in a peculiar dilemma of national loyalties, creating all kinds of problems for them in the countries where they now reside.

Oh, by the way, there are some people living even in the Islamic Republic of Pakistan who call themselves ‘Hindus’ and are even officially recognized as members of a national Hindu minority — which means that the Hindus born and living in Pakistan are Pakistanis. And they are Hindus, but not Indians. Would the government of India recognize the entire Hindu minority in Pakistan and Bangladesh, Nepal, Burma, Indonesia, Malayasia, etc. as Indian nationals and thus make them ‘traitors’ in their own countries?

With the BJP constitutionally at the helm of the country (India), it may not be diplomatic or politically savvy for its sympathizers to openly declare Nepal or even Burma, Indonesia and Malaysia to be ‘Indian’ countries — Akhand Bharat can wait till the BJP moves over to the opposition benches in Parliament.

This is how sophistry can sometimes backfire — but not often enough.

The debate in the country actually is about another issue — religio-political stew. And its an old debate which has been given a fresh lease of life by a statement of the highly respected chief of the RSS, Shri Mohan Bhagwat describing all citizens of India as Hindus. Typically, he explained later that the term Hindu is only a synonym for the old expression ‘Sindhu’ used for the people of the Sindh valley which later morphed into the English expression Indus and still later to Indes and India.

But the whole debate, once again, is rooted in another debate — the place of religion in politics.

In 1984, India was rocked by three traumatic events that almost shook one’s faith in the destiny of the nation as a secular democracy. All three had their origins in the ‘fake-debate’ over the place of religion in politics and all three were foreseeable and, therefore, eminently avoidable.

Tragedy began with the then Prime Minister Indira Gandhi ordering troops of the Indian army to invade the most sacred shrine of the Sikhs, Sri Harmandar Sahib, or the Golden Temple in Amritsar, resulting in the virtual destruction of the iconic Sri Akal Takht Sahib. This was in June 1984. Exactly five months later, Indira Gandhi was assassinated as an act of reprisal by the Sikhs. What followed was India’s hour of shame: thousands of innocent Sikh men, women and children dragged out of their homes to be burnt alive, raped and subjected to an inhuman orgy never witnessed at this scale in the country since its independence from the British in 1947. What added to India’s shame was that Indira Gandhi’s son, Rajiv, who succeeded her to the throne, not only justified the massacre but also rewarded its perpetrators with high positions in government including cabinet berths. None of the guilty has been punished even 33 years after the tragedy.

Anyone who thought that the country may have drawn the right lessons from this tragedy was soon to be proved wrong by what happened at Ayodhya on December 6, 1992 when motivated crowds rampaged and reduced to rubble the 16th century Babri mosque.

Interestingly, the BJP, spearheaded at that time by L K Advani, had been among the staunchest critics of the Akalis mixing religion with politics in Punjab. The Akalis sought ideological moorings for their religio-political brew in the dictates of their Gurus who had underlined the need for subjugating politics to religious ideals. (“Raj bina nahi dharma chale hai/Dharam bina sabh dale male hai”— roughly meaning, “Without state participation, religion cannot flourish. Without religion, the state would go too ruins.”)

It is quite another matter that by religion, the Gurus did not mean “communalism”, nor even “Sikh religion”. What they actually meant to emphasize were religious ideals such as equality, justice, freedom, truth and fair-play. That emphasis on the state being guided by religious principles is present in all faiths, including Hinduism (Ram Rajya), Islam (Juda ho deen siyasat se to reh jaati hai Changezi) or Christianity in which Jesus is the True King. This has nothing to do with mixing religion with politics. This has nothing to do even with mixing worship and other religious practices with politics. And this certainly has nothing to do with mixing religious identities with politics, or with politics being driven by the dictates of a particular religion, any religion. But trust our politicians to distort the scriptures.

The BJP, never truly enamoured of the Congress brand of secular politics, had already begun to cast its constitutional veil away and emerge in sharper and more strident contours of its true political ideology which is rooted in the RSS brand of patriotism. To be fair to the RSS, they have never openly disowned the secular ideal enshrined in the constitution. But that was not even necessary. And that’s the whole trouble.

Our mainstream political parties no longer believe that they have any need to pretend to be secular. What some of our more strident parties have done to our polity will take a long time for this country to even fully react to. They have demonized “secularism” making it almost synonymous with unpatriotic conduct. You cannot be secular these days without being accused of being pro-Pakistan, just as you could not be a Leftist in the sixties without being accused of loyalties with China. Our politicians have mesmerized the media into reading “pseudo-secular” for secular. They have changed the terms of engagement so smartly and so dramatically that the debate in the country is no longer between the secular and the communal forces. It is only between “pseudo-secular” elements on the one side and “nationalists” on the other. Hindutava has been invested with a secular currency so much so that to question Hindutava amounts to questioning the Indian-ness of an Indian.

And it is all about sophistry and linguistic chicanery. You say one thing and deliberately imply another and leave the door open for multiple deceptions through vagueness later. The statements emerging from the headquarters of some of the leading political parties these days are a classic example of communal casuistry — the usage of purposely misleading expressions and arguments in order to keep the communal cauldron alive. Those who find nothing wrong in declaring that everyone born in India is a Hindu cannot be unaware that the Muslims are not Hindus and the Hindus are not Muslims while both are Indians, and proudly so. Characteristically, they have invested the term ‘Hindu’ with a meaning which has never been in usage anywhere in the world.

Of course, our politicians know what they are doing. Some of them express ‘innocent shock’ over being misunderstood on the Hindu-India debate — except that this innocence too is rather methodical. They know that the moment anyone mentions the word ‘Hindu’ anywhere in the world, it will invoke images of the people belonging to a religion which has the Gita, the Vedas, the Ramayana, the Mahabharata, etc. as their iconic cultural and religious identity-symbols. Nowhere in the world is the word Hindu taken to mean Indian; it is always understood as a description of the followers of the Sri Ram Chandra and Lord Krishna. And nowhere in the world is the word ‘Indian’ a synonym for ‘Hindu’. Every Hindu knows that a person belonging to Sikh religion or to Islam or to Christianity is not a Hindu even if he is born and brought up in India. But our political ideologues innocently declare that everybody born in India is a Hindu because the word India comes from the word ‘Indus’ which is an English version of the word ‘Sindhus’. The ancient Arabs and Persians now come to the aid of the political-ideologue, helping him keep alive the confusion between the Hindus and the Indians.

Not that anyone in his senses needs any scholarly explanations to know that all Indians are not Hindus or that not even all Hindus are Indians — except if the government of India wants to own responsibility for all Hindus living as citizens of various countries in every part of the world. But of course that is not even the intention of any Government or political or cultural organization in the country. The debate has relevance only in the windmills of political skullduggery.

Any slogan that can sufficiently and appropriately polarize the country along communal lines is good for its leaders so long as communal polarization can yield votes. In the first two decades post Independence, India was fortunate to have survived such polarization although the danger always loomed large on the horizons. Even leaders like Pandit Jawahar Lal Nehru were alive to the dangers which communal polarization posed to the very survival of the country in its formative years. Fortunately for the country, Nehru chose to pitch his politics in a mix of economic development and social consensus. The Nehruvian era will always be remembered as the “the era of the Moderate Secularist” in which ideological or communal extremes were held at bay with emphasis on economic resurgence and consolidation.

Unfortunately, there is no secular icon on the scene today capable of inspiring and navigating the nation away from dangerously divisive slogans. For that to happen, we will need someone who can redirect the national focus back to economic issues and turn moderation into a religion. Right now, there is no one with a voice credible enough to inspire enough confidence in that direction. The vacuum is frightening. 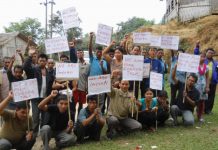