The state BJP will soon choose a new state chief as the second term of Satpal Satti is ending in September. Though BJP had won December 2017 assembly polls with thumping majority (44 seats), there are talks among the party leaders and workers in the state about the performance of Jai Ram Thakur government.

Sources told the Tehelka that the chief minister may adjust few of the leaders and MLAs in various boards and corporations to end the unrest among them. Party president Amit Shah is expected to visit Himachal soon. State BJP in-charge Mangal Pandey has already visited Shimla and held meetings with top BJP brass and other senior functionaries along with the chief minister. A senior BJP leader told Tehelka that the party has to replace Satti as he has completed two terms as state president. “We won assembly elections under his leadership, however according to the party constitution one can not hold state president post for more than two terms,’’ he added.

The problem in front of the party leadership is that after September they will have only six months before the parliamentary elections. Insiders say that party may appoint an ad-hoc president or may extend the term of Satti for few more months. Many in the party feel that a senior and influential leader should be given command of state chief so that party could perform well in the coming Lok Sabha polls.

It is important to mention here that BJP had won all the four Lok Sabha seats in 2014 and popularity of Prime Minister Narendra Modi had played a major role in that. However, things have changed now and few political observers feel that Modi’s popularity alone will not be able to give BJP that success in 2019 general elections.

The problem in the party is that there are at least four power centres in the state BJP. Union Health Minister Jagat Prakash Nadda is considered to be the most powerful as he enjoys the support of party chief Amit Shah and prime minister Modi. However, if one talks about the strength on the ground, former chief minister Prem Kumar Dhumal is the most influential leader. Despite losing previous assembly election he held a larger chunk of voters. He is considered to be the most powerful Rajput leader in state BJP.

Many in the party feel that giving responsibility to Dhumal will increase the possibilities of BJP performance in the Lok Sabha polls. On the condition of anonymity, a senior BJP leader said, ‘’If Dhumal is given bigger responsibility in any shape, this will also help in covering the alleged weaknesses of BJP government in the state’’. He is need of the party before the parliamentary polls, he added.

Interestingly, Dhumal has visited Delhi for more than two times in the recent days. Party leaders are curious about his visits to Delhi. Though a bigger chunk of the party is supporting a pro-active role of Dhumal in the state, it is said that former chief minister Shanta Kumar’s camp is opposite to this opinion. It is pertinent to mention that Shanta and Dhumal camps are considered like north and south poles in the state BJP.

Though Shanta Kumar is not considered influential in the state now, it was he who had strongly opposed the appointment of Dhumal as chief minister in December 2017. It is said that even a section in the party high command was also in favour of appointing two time chief minister Dhumal (who was declared as party’s CM candidate before the elections) as the CM was keeping in view his services to the party in tough times but consensus was if a defeated leader is made chief minister this will send wrong message among the masses. However, now many in the state party feel that Dhumal would have been better choice as CM.

It is said that Chief Minister Jai Ram Thakur may appoint few MLAs and party leaders as chairmen and vice chairmen in the boards and corporations in the coming days to give representation to those areas which could not get ministerial berths during the formation of the cabinet. With the total strength of 68 member assembly Himachal can have only 12 ministers including the chief minister according to the laws and all the berths in the ministry are already occupied. So, CM will adjust his aspirants on the boards and corporations.

Keeping in view the controversy over the appointments of parliamentary and chief parliamentary secretaries, Thakur has already made it clear that he has no intention of appointing CPS in the state. Sources said that if the party decides to appoint ad-hoc state BJP chief, present state chief Satpal Satti may be ‘’adjusted’’ in the government.

Sources say that he may be given the coveted post of the Chairman of 20 Point Programme Committee.

The coming days are also important for chief minister Jai Ram Thakur. There is all possibility that Shah may indicate about party high command view on the functioning of Jai Ram government. Jai Ram is well aware of his main opponents who are within the BJP. He has also visited Delhi and met various union ministers to stress on clearance of various state projects. Though Jai Ram is chief minister, he didn’t have any strong group in the state BJP.

His supporters, though are making all efforts that when Shah visits the state, they present an impressive show. They are also highlighting various achievements of Jai Ram government on various fronts. Sources said that some senior party leaders may raise the issue of performance of the party government in front of Shah. There seems to be very less possibility of removing him though despite questions on his capabilities have worried the Jai Ram camp. It is said that the RSS has played a role in making Jai Ram the chief minister after BJP got a thumping majority in 2017 assembly elections, though the party had fought under the leadership of Dhumal, who otherwise lost his own election. 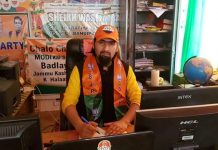