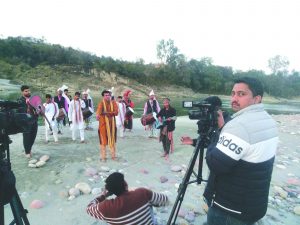 The breathtaking locales of the hill state-Himachal Pradesh have always attracted renowned film-makers but still the State is full of popular, scenic, cultural, heritage and spiritual sites which are yet to be explored. Many artists and creative persons of the State have made their mark in various departments of film making both at national and international level.

State government has approved Himachal Pradesh film Policy-2019 to create an amiable atmosphere that not only would facilitate film shooting at a large scale in Himachal Pradesh, but also ensure all round development of activities related to various aspects of film production. It will develop Himachal Pradesh as an important destination for film production and promote the culture, history, heritage and glorious traditions and captivating tourist places of the State through films to attract tourists. It will also provide opportunity of growth to the talents of the State in all departments of film-making. It will generate opportunities of employment in the State besides attracting additional capital investment through film industry.

Himachal Pradesh Film Development Council (HPFDC) would be set up for long term and meaningful development of Film Industry. The Council could delegate its financial powers to the Executive Committee. The Executive Committee will examine the eligibility and fix criteria to provide financial and other incentives to film-makers. The State Government in Information and Public Relations Department (IPR) will create the Film Development Fund for financing schemes for development of films and film related infrastructure. For this fund, cess of 50 paisa per bottle of liquor will be levied in the State.

The State Government will promote creation of infrastructure required for making films in private sector. Until the availability of this infrastructure in the private sector, the State Government will make efforts to remove the shortcomings in the existing set up. A Film Facilitation Unit will be established in the IPR and will maintain a list of professional equipment available with the private production houses located at Chandigarh and Delhi and this list will be made available online on the web portal proposed to be created for the facilitation of the film makers.

Himachal Government will endeavor to set up Film City in the State so that the entire required infrastructure is available at one place. The State Government will also provide land on lease for setting up of the film city and will actively contribute in creation of ancillary infrastructure. The State Government will promote the setting up of film studios and processing labs till a fully active film city is established in the State. Government will allow the film units engaged in outdoor shooting of film in the State to use airstrips and helipads located in various parts of the State. Film Facilitation Unit will work as single window mechanism for granting all permissions relating to shooting for films in Himachal Pradesh under one roof in a time-bound manner and will disseminate information on shooting locations as well as the facilities available in the State for production/post production.

Financial grant to the Hindi and English Cinema makers with a maximum limit of Rs. 2 crores, as recommended by the HPFDC who have already produced minimum 3 feature films with country wide audience, subject to the criteria that at least 50 per cent of the entire outdoor footages used in the feature film must be of Himachal Pradesh. If at least 50 per cent of the entire outdoor footage used in a Hindi or English feature film is shot in Himachal Pradesh and if at least three of the leading artists of the film are from the State then the film producer or the Film Production House will be provided an additional assistance of 25 Lakhs or the actual remuneration paid to the Himachali artists, whichever is less, for producing this Hindi or English feature film.

The State Government would institute Annual Film Award financed from Film Development Fund to honour persons making quality films. Hindi Films/films in local languages, whose at least 50 per cent shooting has been done in the state, would be considered for the award. It is proposed that the film units doing outdoor shooting in the State will be given 30 percent concession in room rent on their stay in hotels of the HP State Tourism Development Corporation. Closed Cinema Hall will be encouraged to reopen. For this, financial incentives as recommended by the Himachal Pradesh Film Development Council shall be provided to such Cinema Halls with a maximum amount of 25 Lakhs.

Cinema halls will be accorded the status of Industry in Himachal Pradesh. The State Government will start a new scheme for expansion of public amenities in cinema halls and making them people oriented. Under this scheme works related to modern sound system, air conditioning, generator set, false ceiling, and replacement of furniture and wide ranging renewal will be carried out by giving 50 per cent reimbursement on SGST.

Under ‘Kalakar Protsahan Yojna’ talented children and youth of the State, who join various courses in performing arts and other courses related to Performing Arts in reputed institute of the country will be encouraged. One time grant of 75,000 will be provided to such children and youth selected for studying in these institutes. The expenditure on scholarship will be borne out of the Film Development Fund.