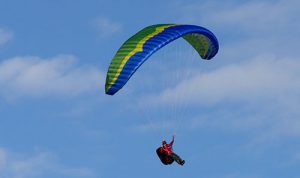 A Non-Resident Indian (NRI) from Australia Sanjay Kumar Ramdas Devarkonda died in a paragliding mishap after he crash-landed in the Joginder Nagar area of Mandi district, police said on Thursday.

The 50-year-old went missing after he took off from Bir Billing paragliding site on Wednesday and a rescue operation was launched to find him.

Devarkonda body was found after six hours of search near Joginder Nagar area on Thursday and was sent for post-mortem.

He, however, died before the rescue team could reach him.

Devarkonda was a resident of New South Wales in Australia.

This is the second death of a paraglider in Himachal Pradesh over the past week. Earlier Singaporean paraglider Kok Choonk Na was found dead in Kangra Valley.

A number of foreign and domestic paragliders have swarmed the valley in the run-up to the Paragliding Pre-World Cup to be held in Bir Billing on October 27.