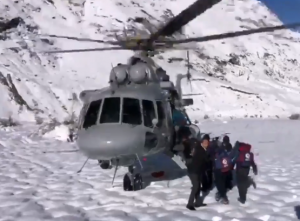 The Indian Air Force on Friday resumed its rescue operation and airlifted 26 people including Six bikers and 20 tourists who were stranded in Himachal Pradesh’s snow-marooned Lahaul Valley.

The stranded bikers including (three women from Delhi, Trivandrum and Rajkot) and 20 other tourists were airlifted from locations near Chhattru and Chhota Dara near Bara Shigri glacier.

According to the reports, more people are reported to be holed up at a snowbound location near Chhattru. They will be rescued in subsequent sorties by IAF helicopters later in the day.

Indian Air Force tweeted, “Update on #HimachalRescue – MLH lands back at Kullu after it took off at first light, today. It safely picked up 6 Bikers & 20 Tourist from Chattru & Chita Dara near BaraShigri Glacier. Rescued bikers included 3 ladies from Delhi, Trivandrum & Rajkot. Other heptrs are airborne.”

The total number of people rescued since September 24 rose to over 1,350.

The Border Roads Organisation (BRO) is in full swing to clear the snow for restoring the road link between the Baralacha Pass and district headquarters Keylong.

On 27 September, 424 people were evacuated from Lahaul-Spiti, while 350 via the Rohtang tunnel and 74 others were airlifted. 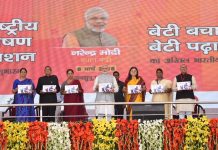 Has the much-touted BBBP scheme met its targets?