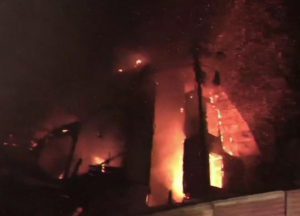 A major fire broke out at a hotel in Himachal Pradesh’s Shimla in the early hours of Monday.

The fire was reported from Grand Heritage hotel.

According to the sources, the fire was eventually doused and no casualties or injuries were reported in the incident.

As the building was under renovation, fortunately, there were no guests in the hotel.

The cause of the fire was not immediately known.