The injured were rushed to the hospital for further treatment.

According to the sources, forty-five BJP workers were travelling in the bus when the accident took place at Nagni village in Banjar area of Kullu.

The cause of the accident is not known yet.

On May 5, five BJP workers were killed and one critically injured after their car fell into a gorge in Himachal Pradesh’s Mandi district. 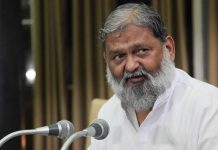