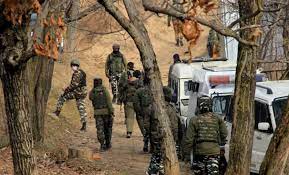 Security forces uncovered a hideout in Ramban district of Jammu and Kashmir and seized ammunition and explosives today.

Police launched a search operation on a tip-off in Sumber area, a police spokesman said.

During the searches, they recovered 179 rounds of ammunition, including 132 rounds of AK-47, 12 rounds of Chinese pistol, two magazines, one wireless set, and two UBGL grenades with one UBGL tube, they said.