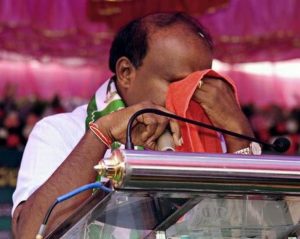 Karnataka Chief Minister HD Kumaraswamy on Saturday broke down at an event in Bengaluru, organised by his party JD(S) to felicitate him for becoming the CM.

Refusing to accept the felicitation by party workers and indicating his unhappiness between the coalition of Congress and JD(S), he said “You are standing with bouquets to wish me, as one of your brother became CM & you all are happy, but I’m not. I know the pain of coalition govt. I became Vishkanth & swallowed pain of this govt.”

Upset with the criticism he faced within two months of forming the government and limitations in implementing the promises, an emotional Kumaraswamy said, “he would not keep the post of the CM at the cost of his self-esteem. If I decide to do so, I can step down within two hours”. “I don’t waste time and energy to save my chair. I have inherited the legacy of my father H.D. Deve Gowda, who quit the post of Prime Minister,” he added.

“I have not become Chief Minister today happily. I have pain. I had placed several issues in front of people during election feeling that they will trust me, but people of the state have not shown trust in me,” he added.

The JD(S) and the Congress joined hands in the state after the BJP emerged as the single largest party with 104 seats in the Karnataka Assembly Elections. To keep the BJP out of power, Congress pledged unconditional support to the JD(S) to form the government. Kumaraswamy took oath as Chief Minister on May 23, 2018.