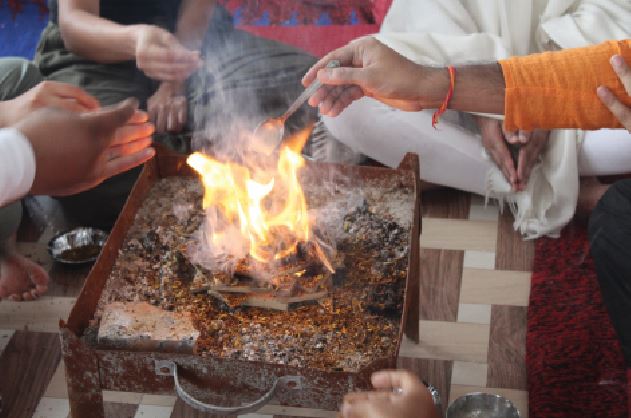 Sanatan Rishis of yore in their empathy with humanity at large had graciously developed and bestowed their time tested invaluable innovations, which had in them deeply embedded highly futuristic beneficent technologies for the mankind. Ostensibly though these were styled as extremely precious rituals and vidhis associated with its existence, yet each and every.

Stipulated ritual had highly advanced beneficiary methodologies associated with them. Hawan, a sacred Sanatan Dharam ritual in which offerings are made to the fire, as we know it today was made a prime part of any major Puja. The esoteric purport behind the apparent sacredness and purity of performing a Havan, was in fact, an advanced and ever relevant process involving not only the purification of environment but also to serve as an innovative drug delivery system to administer life saving medications through nasal route.

Fire, which supposedly is one of the main links between cosmic consciousness and human consciousness and as such is prominent amongst the five major components of all existence, comprises the main element of a Hawan or Homa. The offerings made to the sacred fire, during any specific Hawan, are said to purify the environment as well as the people around. It is also believed to drive away all negative energies around.

Any kind of Hawan is, normally performed with an aim to achieve spiritual as well as material success. It is seen as one of the ten neeyams/sacred rules or positive virtues that are prescribed for a devotee, who wishes to come closer to the Divine, the one who wants to acquire Oneness with Him. Hawan is also one way of performing the Dev Yagya, which comprises any man’s five daily duties, as per the tenets of the Sanatan Dharma.

Like all benign variations of different Sanatan Dharma rituals depending on the region, the local beliefs and customs, requirements of specific purposes like offering fire oblations to particular deities, celestial planets, achieving desired objects etc. all processes connected with performance of sacred Hawan undergo appropriate variations in the form of Hawan Kunds (Receptacles) used, the wood used for lighting fire, the herbs and other materials used for offering oblations / burning.

All these variants make a very interesting study and in fact, have in recent times, been scientifically proven by a large number of studies conducted by the National Medicinal Plants Board in the Department of AYUSH Ministry, New Delhi, the National Botanical Research Institute, Lucknow, Chemistry Department of the Allahabad University, the Maharishi Ved Vigyan Vishwa Vidyapeetham in Noida, Baba Farid University of Health Sciences, Faridkot, the Centre for Occupational and Environmental Medicine at Delhi’s Lok Narayan Jai Prakash Hospital, the Vallabhbhai Patel Chest Institute at University of Delhi etc.

All prevalent systems of treatment engaged in alleviation of physical diseases administer their respective drugs mostly through oral route and injectable route in emergencies. All the medicines ingested through mouth produce effects only after they have been digested and absorbed into the system and many of the medications ingested orally are not even utilized by the digestive system and thus remain unabsorbed. All such medications may also disturb digestive processes adversely and may entail long term serious side effects too. The same is more or less true when medicines are directly injected into the blood through intravenous route.

Though quicker results are achieved by administering medications through injectable route, yet their adverse side effects are often more pronounced. Keeping in view such limitations in drug administration processes, research into the safest and quickest drug delivery system has lead the scientists to the conclusion that nasal route to administer medications is the best and a non-invasive one.

As a pleasant surprise to most of the modern day sceptics, who have been mentally programmed to believe that whatever our ancient heritage, in the form of scriptures, rituals, customs and traditions stipulates, is all humbug and its only the modern westernized form of knowledge which is the ultimate one, it should be like an intellectual shock to know that our Sanatan Rishis were well aware of the merits of delivering medications through nasal route and thus alleviate human suffering in a perfectly non-invasive manner and that too without exorbitant expense and any show
of gadgets.

The hallowed Ayurvedic texts since times immemorial have propounded that “nasya hi shirsho dwaram” means nose is the best route, obviously for the administration of medications for various diseases. For optimal use of medications required for alleviation of various mental diseases, it is imperative to deliver them in the vaporous or nano-form so that the requisite concentration of medications for curative purposes can be achieved by crossing the blood brain barrier through mucous membrane. While the modern day researchers are engaged in optimising the use of nasal route for this purposes, yet our own society forgets the rich legacy of our venerated Rishis who bestowed upon us, this yet-to-be-adopted route of drug delivery millions of years ago. 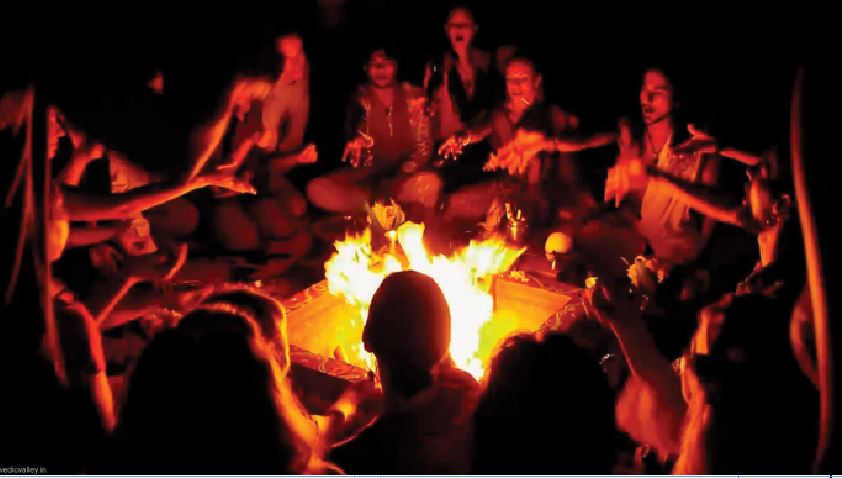 Hawan has been prescribed as a process, though under a religious garb, in which special herbs are offered and put in the fire of medicinal woods ignited in a specially designed fire pit. A critical analysis of available literature reveals that many components of Hawan are having a number of volatile oils that are specifically useful for prevention and treatment of various mental aberrations through an innovative mechanism of action. Under the high temperature of fire, the vapours of these oils from herbs enter into the central nervous system through nasal route. Performing Hawan at prescribed intervals tends to maintain the threshold value of the therapeutic components in the body and help in preventing many mental aberrations, like anxiety, epilepsy, dementia, etc.

Research on medicinal use of aromatherapy as an alternative to treat many mental disorders by using various essential oils, such as lavender, lemon and bergamot has been steadily progressing. Most studies show that inhalation of these essential oils can communicate signals to the olfactory system and stimulate the brain to exert neurotransmitters (namely, the serotonin and the dopamine) thereby further regulating mood.

Though since times immemorial Ayurvedic texts have mentioned the use of aromatic and medicinal herbs in effectively treating various diseases afflicting the human race, yet the modern day sceptics deprecated their prescription for the want of so-called “verified science” behind their use. The obsessive fad of discovering the pharmacology of the essential oils and/or their single chemical constituents as a condition precedent before their use as an alternative therapy, therefore, had kept in abeyance our rich legacy of ancient knowledge, being put to alleviate human sufferings at nominal prices, by the westernized medicos.

With the oblations into the fire and simultaneous chanting of mantras, one’s chakras are re-energized, creating a rejuvenating and revitalizing effect for both the mind and body. One attains positive thoughts, actions, and words which pave way for one’s success. Hawan is said to dispel all negative energies and a protective shield is believed to be built around the house where the hawan is performed, thus warding off any negative or evil energies. Hawan also induces peace, good health, prosperity and clarity of thought, with the increased power of discrimination and an improved usage of mental abilities.

Consequently, success is attracted towards all who do this ritual. For optimum results, Hawan may be performed daily. In every household, Hawan should be carried out the once per week at least in the presence of all members of the family. Early hours of the morning are considered to be the most conducive for all religious activities as the air is charged with energy or the vital force (praan) at that time. However, this practice may also be done at a time that is best suited for everyone.

Referring to venerated Vedas, in Saam Veda, about 114 Mantras speak about the importance of Havana. Yajur Veda says that the Havana is the most important, necessary and useful deed. The Vedas say that Yagya or Yagnya and Gayatri Mantra are the only ways of attaining Moksha or Salvation or Self-realization. All four Vedas have innumerable mantras related to Yagya. Havan has many benefits; starting from our body, mind, soul to the environment.

It not only purifies the air but also removes the impurities from our mind and body. By concentrating on the Hawan fire, and by chanting the required divine mantras, all disturbing and wavering thoughts get decimated in the fire which results in peace, tranquillity and equanimity of mind and soul, thus helping in maintaining the unity and harmony in the family and the community.

The choice of Hawan Kund (Receptacle) normally used for performing Hawan is another interesting facet which is determined keeping in view its use under different ritualistic situations and the result desired. As per Sanatan Dharam Scriptures, the unique shape of the Hawan Kund ensures controlled generation and multi-directional dissipation of energy produced by offering of oblations. Hawan serves as a generator of essential and very powerful energy fields and spreads them in its surrounding environment.

In its simplest form any Hawan Kund or fire pit is made of bricks, which is normally decorated with colourful flowers and leaves. Normally the Hawan Kund is of rectangular or square shape, but it could also be triangular, circular, semi-circular, hexagonal, octagonal or star shaped, depending on the particular result sought to be achieved by performing the prescribed rituals. Each of the said Hawan Kund shapes has been given a specific name reminiscent of the resultant effect which is anticipated.

Needless to say that the over polluted environment is the biggest challenge being faced by the mankind now a days. It is not only threatening the very survival of the human race but also of the entire living world. Though the inhabitants of this planet have in recent times become truly concerned about the environment, which has become increasingly polluted over the years, yet our venerated Rishis and Maharishis of yore had since the early Vedic Age advised us of the purification process of the environment through the process of a Hawan.

Logically, if large number of people perform Havan at least two times in a day, it could have a larger influence in purifying the environment, but we, in our misplaced effort not to be labelled as traditionalists, have ignored it to our own peril. If all of us resolve to follow the rules of Sanatan Dharma and perform our acts accordingly, there is no doubt that within a short time, the world would be a much better place to exist in.

Mercifully, the current drive to develop the indigenous knowledge and resources for the betterment of teeming millions of this nation, has spurred a movement to re-evaluate, re-calibrate and re-establish the versatility, credibility and depth of our ancient heritage, which has, at least for last one thousand years, been made to languish in an unwarranted neglect. The writer is sanguine that the hallowed rituals of performing Hawan of various descriptions prescribed by our venerated Rishis and Maharishis of yore are  adopted at least now by the sceptic westernized Indians.