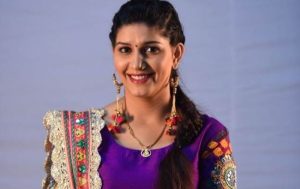 A day after reports said that Sapna Chaudhary had joined the Congress.  Haryanvi singer and dancer on Sunday denied reports of joining the Congress and said she is not part of any political party.

“I have not joined the Congress party. I am not going to campaign for any political party. The photograph with Priyanka Gandhi Vadra is old,” Sapna Choudhary said.

Sapna also claimed she has not signed any membership form of the Congress party.

On Saturday, UP Congress chief Raj Babbar had tweeted a picture of Sapna along with Priyanka Gandhi Vadra and welcomed her to Congress.

There were speculations that Congress might field her from Mathura in the upcoming Lok Sabha elections to take on BJP’s Hema Malini.