In another Nirbhaya like gruesome rape and murder case, the teenager girl who was missing since January 9 from Kurukshetra, was found dead near a canal in Budhakhera village of Jind district on January 13.

The body of the 15-year-old Class X student was found with mutilated private parts and a ruptured liver at the canal, 100 km away from Haryana’s Jind district. Girl’s body was covered just by a torn shirt, and there were several wounds on her face, neck, lips and chest.

The district police have reportedly detained six youths from a village in Kurukshetra for their alleged involvement in the murder of the minor girl.”The main suspect was a student of class 12 and the special investigating teams were gathering evidence” said SP Abhishek Garg.

The key suspect was known to the victim and age of other suspects is being verified for the further legal course, the police officer added further.

The postmortem report revealed that the genitals of the girl were mutilated. PGI Rohtak Doctor SK Dattarwal said: “the body had many injury marks, the private parts were mutilated and there were lot of internal injuries. Signs of sexual assault are visible and looks like three-four people were responsible and signs of drowning also found.”

Girl’s father hit out at administration and demanded justice. The family members even refused to cremate her body till their demands, including a CBI investigation and armed security, were not met.

Two special investigation teams led by senior officers have been set up to investigate the schoolgirl’s rape. 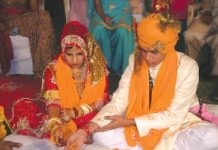