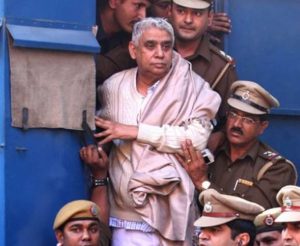 A local court in Haryana’s Hisar on Tuesday sentenced self-styled godman Rampal to life imprisonment in connection with a murder case against him.

The court had found Rampal, head of Satlok Ashram, guilty in the two cases of murder last week.

The sentence in the 2006 murder case will be pronounced tomorrow.

Self-styled godman was convicted on the charges of murder in a 2006 case related to the death of a woman supporter at the Satlok Ashram and in another case, Rampal and 27 of his followers were convicted for 2014 murder, that dealt with the deaths of four women and a child.

In both the cases, self-styled godman was charged under section 302 (murder) and section 120B (criminal conspiracy) of Indian Penal Code.

He was arrested in November 2014 after thousands of security personnel laid siege to the Satlok Ashram in Hisar.

He was born in September 1951 in Sonepat district. He once worked as an engineer in the Government of Haryana’s irrigation department.