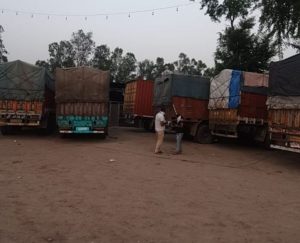 In a major crackdown, Haryana Police have seized 5200 boxes of illicit Indian Made Foreign Liquor (IMFL) in Sonipat district. The consignment was being smuggled from Punjab in trucks during the ongoing Covid-19 lockdown.

The Police have arrested three persons in this connection. The estimated value of seized liquor is around Rs 3 Crore.

According to a spokesperson of Haryana Police, those arrested have been identified as Manjit Singh, a resident of Ajrabar, Patiala district, Balwinder Singh and Davender Singh of Mubarkpur and Derabassi in Mohali district of Punjab.

Preliminary investigation revealed that the seized liquor was being illegally transported from Derabassi in Punjab for supply in different parts of Delhi.

After getting a secret input about illegal transport of liquor in trucks parked at Hans Dhaba, Murthal, a Special Task Force (STF) team of the Haryana Police present on the GT Road near Murthal raided the location and seized 5200 boxes of IMFL from different trucks.

A case under relevant sections of the Excise Act had been registered against the accused.