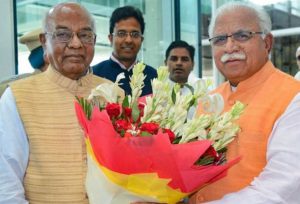 Governor of Haryana Satyadev Narayan Arya in his address on the occasion of ‘Rajya Shikshak Puraskar Samaroh’ organized at Haryana Raj Bhawan on Wednesday, appreciated Haryana Chief Minister Manohar Lal for ensuring education based on moral values and character building in the State.

On this occasion, Arya honoured 32 best performing teachers with State Award. The State Awardees were presented with a cash award of Rs 21,000, certificate and medal. As per the policy of the State Government, the awardee teachers would be granted two years extension in service and two annual increments in the salary.

Laying emphasis on the job oriented education in the present day scenario, Satyadev Narayan Arya said “I am happy that under the able leadership of Chief Minister, Mr Manohar Lal, Haryana is the first State to start the National Vocational Educational Qualification Framework scheme for the skill development of students right from the school level”. Under this scheme vocational courses have been started in 1051 schools of the State.  He said that good governance, transparent administration and policy of zero tolerance against corruption of Chief Minister Manohar Lal is also being appreciated throughout the country.

The Governor said that this day also provide them an opportunity to introspect as how they could perform better for building a new nation. He said that Swami Vivekanand had said that the education should be in accordance with our nation’s requirement. Recognizing the same, former Prime Minister, Late Mr Atal Bihari Vajpayee had launched “Sarva Shiksha Abhiyan” in the year 2000-2001 with an aim to provide free and compulsory education to the children of six to 14 years of age. He said that on the occasion of teachers day today, the teachers should take pledge to realize this dream of former Prime Minister by ensuring education to every child of this age group.

He said that Atal Bihari Vajpayee had dreamt of a diligent and strong Nation. Following the path shown by him, Prime Minister Narendra Modi has envisaged a new India in 2022 and to realize this gave the slogan of Skill India. He also launched National Vocational Educational Qualification Framework for skill development of students’ right from the school level.

Additional Chief Secretary, Education Department, Mrs Dheera Khandelwal enumerated the achievements and activities of school education department. She highlighted the contribution of teachers in enhancing the quality of education. She said that new dimensions have been established in the field of education in Haryana. For this Haryana is being appreciated all over the nation. Khandelwal apprised the Governor that there are 14431 schools in the state, out of which about 8700 are primary schools. The teacher student ratio is 1:25. In 400 schools, first and second class have been made bag-free and are being taught English. The education department has launched various schemes in schools. In 310 schools from 9th class onward Mathematics and Science being taught through English medium, paying attention to training of teachers,  free coaching to students after selection as Super-100 with more than 85 per cent marks in 10th class, planning Hill Station, Adventure Sports camps in Manali and sea coastal areas etc.

She said that Haryana has been honored with top most awards in Khelo India and in the fields of education, art and culture. The Government of India selected three Government schools of Haryana for National Level Awards for Swachh Vidyalaya Puraskar (SVP) 2017-18 and Hisar being among the nine top performing districts in the country with highest number of schools qualified for the SVP 2017-18, she added. 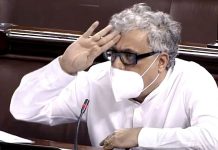 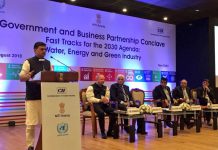