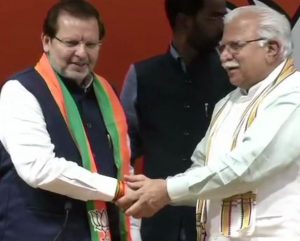 Manohar Lal Khattar and Anil Jain said Sharma’s induction into the party would strengthen it.

Sharma, a former MP from Karnal in Haryana, quit the Congress to join the Bahujan Samaj Party (BSP) during the Assembly elections. He won Karnal seat in 2004 and 2009 but had lost to the BJP’s Ashwani Kumar Chopra in the Lok Sabha polls of 2014.

Sharma had won the Lok Sabha seat from Sonepat in 1996 as an independent candidate and joined the Congress in 1999.